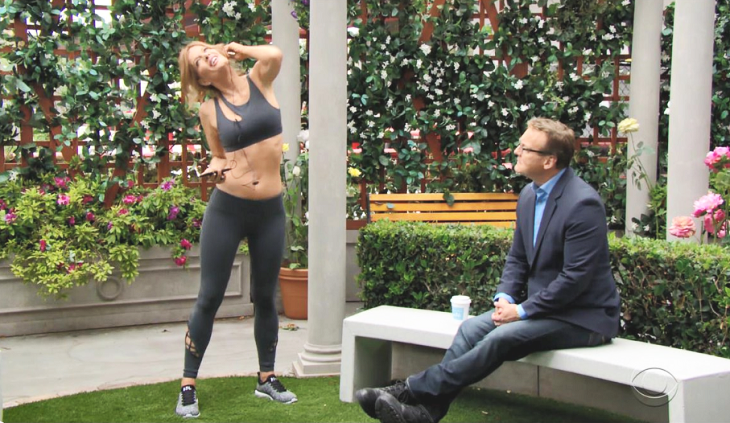 Paul Williams (Doug Davidson) suspects Phyllis Summers (Michelle Stafford) of something on ‘the Young and the Restless. He’s curious about what Phyllis was doing when she was in Las Vegas, Nevada. That line of questioning takes the characters and fans back in history, while also focusing on present day Genoa City, Wisconsin.

Hardcore viewers recall when Phyllis hit Paul and Christine Blair (Lauralee Bell) with her car and left them for dead. Obviously they survived and have endured as Pristine for years.

Phyllis’ battle with Christine began with Danny Romalotti (Michael Damian). Chris and Danny were once great loves, but Phyllis stalked Danny when he was on tour in the 1990’s. Stafford’s alter ego eventually claimed to give birth to his child, Daniel Romalotti (Michael Graziadei), which proved to be a false paternity tag.

Young And The Restless Spoilers – A Re-Election Campaign

Cricket, or The Bug, as Phyllis has long called her, is facing a challenging re-election campaign as she tries to remain GC’s District Attorney. Victor Newman (Eric Braeden), like Phyllis, is doing what he can to prevent this public servant from remaining in office. But the Chief of Police is still in place.

As devoted viewers know, Davidson and Stafford weren’t part of Y&R in the recent past. However, their reappearances are fully embraced by all who love the history and currency of this steamer.

While Davidson never left the cast, he was unceremoniously left out of scripts for months, dating back to last year. But the current regime rightly believes that the base of its audience wants to watch the ongoing tales of its most familiar faces. So, Paul has been seen multiple times recently.

Young And The Restless Spoilers – Classic Phyllis Summers Back

As for Stafford, she was with ‘General Hospital’ (Nina Reeves) since voluntarily leaving Y&R in 2013. Gina Tognoni (Phyllis) performed well as another version of Phyllis, with the classic edition replacing her in the last handful of weeks.

Of course it would be cool to have Y&R bring back Damian and Graziadei, if only for recurring visits, as they’ve done in the past.

That would really remind fans of the epic arcs from days gone by, while also forwarding the stories of those characters who are still living in this fictional Wisconsin city.