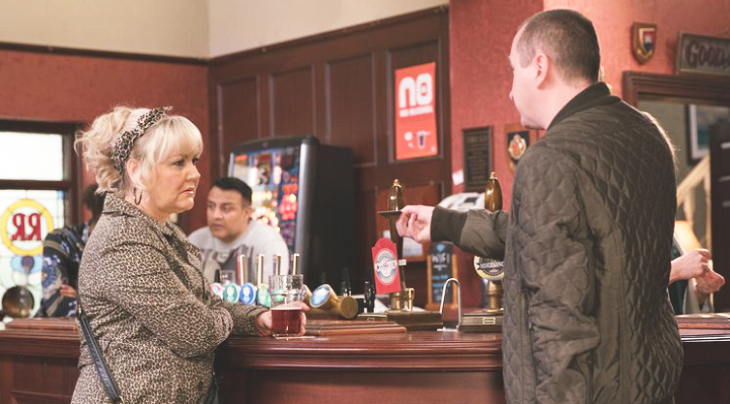 Next week on “Coronation Street,” Beth Sutherland (Lisa George) will come up with a new money scheme after the factory girls decided to forfeit their bonuses to rebuild the factory. The decision came on the heels of the news that the share certificates have finally arrived, which will allow each of them to have a stake in the factory.

The big update, which will be delivered by Sarah Platt (Tina O’Brien), delights the group, however, they still have concerns about the factory’s cramped working conditions. They raise their concerns and Sarah suggests that they give up their bonuses so the factory can be repaired. The group comes to a consensus and agrees but someone is not happy with the decision.

Since most of the clan like the idea of using their bonuses to rebuild the factory, the decision was made official, leaving Beth furious that she won’t be able to get her money. But that doesn’t stop her from trying to get her hands on some cash.

Coronation Street Spoilers – A Scheme To Get Extra Cash

She immediately comes up with a scheme to sell her shares. She brings up her offer to Sean Tully (Antony Cotton) first and then to Paul Foreman (Peter Ash). Clearly, Sean is interested in buying her shares.

Coronation Street Spoilers: Sarah Teams Up With Adam To Fire Nick From The Underworld

So Beth takes the opportunity to convince him to get the cash needed, so he can purchase her shares. She even puts pressure on him by saying that if it doesn’t pay up soon, she’ll be selling to Paul instead.

Beth tries to get her scheme on the down low but Sally will eventually find out her plan after Kirk Sutherland (Andrew Whyment) makes a slip of the tongue.

Kirk recently returned to the cobbles after he decided to leave to chase his dream to be a star. Sally confronts Beth immediately, but still proceeds with her plan. She even tries to auction off her shares, which shocks Kirk the most.

The entire group eventually learns about Beth’s plans. They come to the conclusion that the best way to deal with it is for them to purchase Beth’s shares and then divide them fairly.

Beth’s plan fails as she will be left with no choice but to sell her shares to the group. Will Beth back down this time or does she have something else up her sleeve?