Days Of Our Lives Spoilers: Hope Has Harsh Words For Commissioner Eve 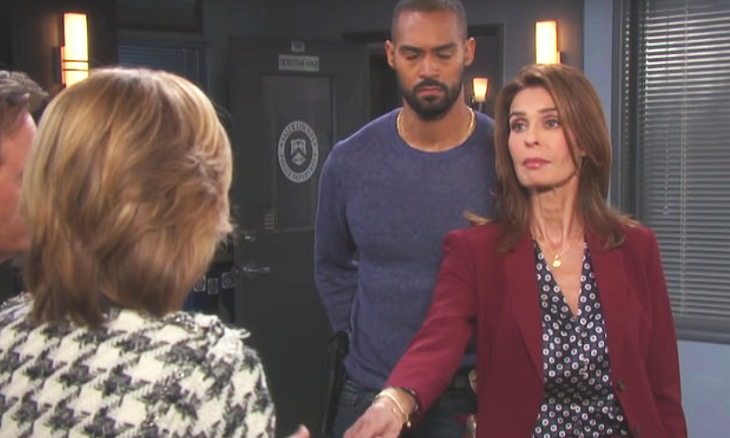 The walls are closing in all around Eve, with her having been discovered tampering with evidence and in collusion with Claire Brady (Olivia Rose Keegan) to frame Ben Weston (Robert Scott Wilson) and deport Haley Chen (Thia Megia). Plus she’s even refused to let Eli Grant (Lamon Archey) investigate disappearances of missing persons, telling him 911 calls were always crank calls anyway.

Hope will have some very harsh words for Eve, some of them about her granddaughter Claire and Eve’s failure to notify anyone in her family about her instability. And some about using the increasingly fragile but dangerous Claire for Eve’s own ends.

Eli will tell Hope about Claire’s cell phone, with messages from Eve on it, that Ciara Brady (Victoria Konefal) took from Claire’s hospital room and played the messages previously in front of John Black (Drake Hogestyn) and Dr. Marlena Evans (Deidre Hall) who immediately went to Eve’s office to confront her!

Hope undoubtedly will have some words with Eve concerning her handing of the Salem Police Department itself, and her inept handling of cases.

Hope and Jennifer Horton (Melissa Reeves) have had some time to catch up recently, and she might hear about Jennifer having been put in jail and that Jack Deveraux (Matthew Ashford) deputized Xander Cook Kiriakis (Paul Telfer) of all people to bring her in.

Days Of Our Lives Spoilers – Swapping Out Of Prisoners

He then made a deal of Jennifer for JJ, having charged him with aiding and abetting of a fugitive from ICE, namely Haley Chen (Thia Megia). True, that was on Jack, but Eve backed him up, and even though JJ’s charges were recently dropped (also by Jack behind Eve’s back) that still didn’t make it right, or even legal, possibly.

Days of Our Lives viewers will be interested to see this discussion that Hope has with Eve in Wednesday’s episode!