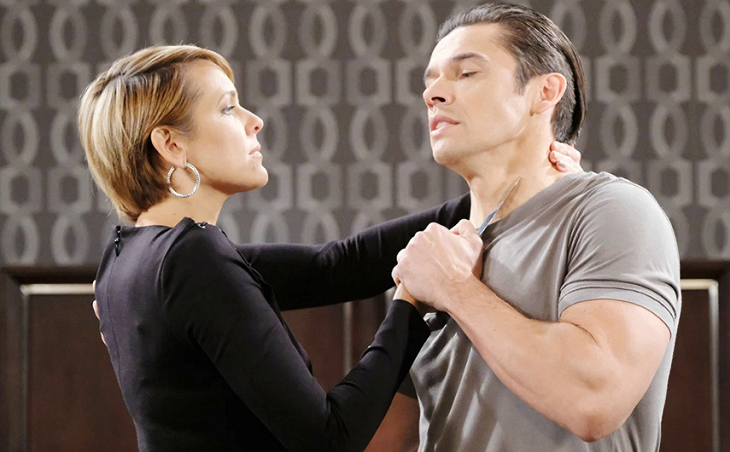 Days of Our Lives (DOOL) recap for Wednesday, July 10, 2019 reveals Ciara Brady (Victoria Konefal) is looking through pictures of herself and Claire Brady (Olivia Rose Keegan) when Ben Weston (Robert Scott Wilson) arrives home. Ben tells Ciara that the doctor’s at Bayview helped him and they will do the same for Claire. Ciara blames herself for Claire’s illness.

Ciara not only feels guilty but angry and sad, she doesn’t know how to get past this. Ben tells Ciara it’s called survival; she realizes the knowing how quickly things can change is how Ben moved on from his issues. Ciara tells Ben he always helps her. Ben says knowing Ciara cares about him is what enabled him to let go of the pain and sadness. Ciara and Ben start to kiss, Ciara pulls away and says it doesn’t feel right.

Ben says they just saved each other’s lives and they begin to kiss again. Ben and Ciara are in bed when Justin Kiriakis (Wally Kurth) texts and says Eve has dropped the charges. Eve makes the press conference about Hope Brady (Kristian Alfonso) and blames Eli Grant (Lamon Archey). Jack congratulates Eve on her press conference before Hope confronts Jack about the statement. Eve moves to get rid of the reporter from The Spectator. Instead, Eve calls Ben and threatens him.

Days of Our Lives Eli joins Hope and informs her that Eve Deveraux (Kassie DePaiva) got to the phone before he did. Hope tells Eli that Ted Laurent (Gilles Marini) is missing and she believes Xander Cook (Paul Telfer) is behind it. Eli tells Hope about the 911 call about Xander killing Ted. Hope and Eli figure out that Xander and Kate are working together still.

Hope tells Eli to get the dispatch log to see if any cars were sent to the Salem Inn and she wants to hear the 911 call. As they wait on a phone call, Hope tells Eli about the necklace. Hope and Eli listen to the 911 call; Hope tells Eli that is Kate DiMera’s (Lauren Koslow) voice. Hope tells Eli to work quietly to protect himself from Eve. Hope calls Kate’s phone but gets no answer. Eli goes to the Kiriakis mansion and tells Xander he’s under arrest for the suspicion of killing Ted.

Jack asks why the Bradys suspect her; Eve says because she left messages on that phone. He questions if destroying the phone puts Eve in the clear. Eve had no idea Claire was going to go this far. Jack tells Eve she knows what she has to do now. Jack tells Eve she has to drop the charges against Ben since Claire already confessed.

Chloe isn’t planning to tell Stefan about Gabi’s plan; she offers to help her when Stefan arrives and looks puzzled. She tells Stefan he and Gabi deserve each other. Gabi tells Stefan that Nicole hasn’t done anything. Chloe wants three times the going rate for the restaurant. Gabi serves Stefan a margarita that is extremely hot, Gabi tells Stefan he deserves it for saying she bitches too much. Nicole arrives at the party and is informed that she is fired.

Days of Our Lives Ted and Kate are still locked in the tunnels waiting on Xander to bring food. Ted seems something on the floor and shows it to Kate. Ted finds a raisin and offers Kate half of it. Ted tells Kate he has been working for Xander. Kate tells Ted that Xander would only save him if he were useful to him. Kate figures out that Ted helped fake Holly Jonas’ (Harlow And Scarlett Mallory) death.

Kate tells Ted he acted so innocently, but he’s up to his eyeballs in this. Kate tells Ted this is his fault. Kate starts playing with one of the broken bottles, and she doesn’t think they will get a chance to use it on Nicole. Kate is tempted to kill Ted for getting her into this.

Days of Our Lives Kristen Dimera holds a knife to Xander’s thought and threatens to kill him. Kristen orders Xander to go back and kill Kate and Ted and tells him they were planning to escape. Xander disagrees with Kristen’s plan. Xander tells Kristen that Kate and Ted are more useful alive. Kristen refuses to believe Xander and orders him to kill Kate and Ted now.

Kristen complains about Stefan’s call, Xander has more people calling him. Xander refuses to kill Ted and Kate because they got in Kristen’s way. Kristen tells Xander if Ted and Kate escape, they will plan Xander. Xander sees Sarah Horton Brady’s (Linsey Godfrey) necklace on Chloe and asks where she got it.