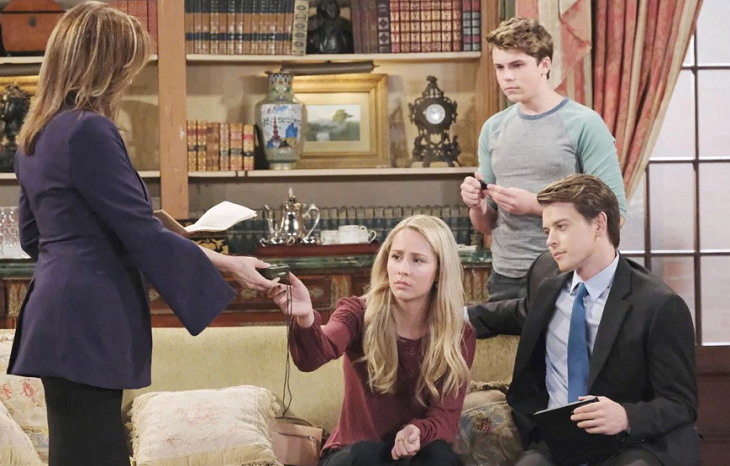 General Hospital (GH) recap for Wednesday, July 10, 2019, reveals Sasha Gilmore (Sofia Mattsson) is watching for Michael Corinthos (Chad Duell) when Shiloh Archer (Coby Ryan McLaughlin) approaches her. Michael grabs Shiloh and throws him away from her table. Shiloh accuses Michael of attacking him, Michael says Shiloh tripped. Sasha tells Shiloh he is being intrusive and tells him to leave before she has him thrown out.

Sasha tells Michael she wouldn’t be with Shiloh even if she weren’t with him. Sasha wants to get a room, Michael has to go to the will reading but invites Sasha on an out of town trip with him. Carly offers Sasha food on the house, and she tells her about Shiloh’s visit. Sasha says for a nice guy, and there is a side of Michael you don’t want to mess with, Carly agrees.

The more Sasha gets to know Michael, the more she likes him. Sasha tells Carly that she and Michael aren’t dating; they are keeping things casual. Sasha says he had a job back home but not a purpose. Carly tells Sasha she knows what it is like to feel stalled. Carly tells Sasha she found her home in Port Charles after finding her mom. Carly excuses herself and hopes they can talk again soon.

General Hospital’s (Sam McCall) arrives at the PCPD to meet with Robert Scorpio (Tristan Rogers) and Mac Scorpio (John J. York) with more evidence against Shiloh. Harrison Chase (Josh Swickard) is there as well hoping for help for Willow Tait (Katelyn MacMullen). Sam brings the tape of Carol Lockhart’s (Mandy Musgrave) confession to the PCPD, Robert thinks getting Carol transported to Port Charles may be harder than she thinks. He believes Sam is going to be the problem with Carol’s transportation to Port Charles.

Robert can’t prove that there was no coercion. Chase wants to know why they aren’t using this immediately. Sam tells Chase he needs to relax, he’s not helping Willow. Chase questions what the point is in working on the right side of the law when the wrong people are behind bars. Sam offers to call Diane Miller (Carolyn Hennesy). Chase thinks Diane could subpoena Carol in Willow’s case. Chase doesn’t think anyone is looking out for Willow. Sam hopes Shiloh is arrested for murder if the investigation is reopened. Chase is furious that there isn’t another witness. Jason surrender’s himself and brings a witness that can bury Shiloh.

General Hospital’s Jason Morgan (Steve Burton) arrives at Sonny Corinthos’ (Maurice Benard) office, and Brick (Stephen A. Smith) joins them. Brick has Dev’s (Ashton Arbab) paperwork. Sonny explains to Jason what is going on with the paperwork. Jason doesn’t think Dev needs to stay at the house since Brick has given him a new identity. Carly Corinthos (Laura Wright) arrives at Sonny’s office to drop Dev off before going to work.

Sonny gives Dev the file Brick has put together and tells him to memorize it. Jason tells Sonny he needs to consider everyone who lives in the house already before moving Dev into it. Jason is worried about Dev’s family and where his loyalties lie. Sonny appreciates Jason’s concern, Sonny sees potential, and Dev needs help. Sonny wants to get Dev’s life on track and to keep him close. Jason gets a call that he has to take. Dev comes back in and shows Sonny what he has learned so far. Brick tells Dev to read up on the hometown he’s supposed to be from, the more he knows, the better.

General Hospital’s Josslyn Jacks (Eden McCoy) gives Carly a drink Sonny has left for her. Carly wants to know if Josslyn needs her to go to the reading of Oscar Nero’s will with her. Cameron Webber (William Lipton) arrives outside and explains to Dev that Oscar’s will is being read today. Dev knows this will be hard on Josslyn and Cameron. Josslyn tells Carly she is going with Cameron to the will reading.

General Hospital’s Monica Quartermaine (Leslie Charleston) is setting up for the will reading. Alexis Davis (Nancy Lee Grahn) offers to help Monica set up, but she refuses. Ned Quartermaine (Wally Kurth) and Olivia Quartermaine (Lisa LoCicero) arrive and want to help as well. Monica needs to work to take her mind off everything the family has lost.

Alexis says she tried to get in touch with Jason since he was the executor, but he didn’t answer, the will can be read without Jason’s presence. Cameron tells Monica that Liesl Obrecht (Kathleen Gati) went overboard at his mother’s reception. Cameron tells Monica about Hayden Barnes’(Rebecca Budig) return; she’s worried about Hamilton Finn (Michael Easton). Cameron wonders why Monica doesn’t like his aunt. Monica remembers Hayden lying about being Drew Cain’s (Billy Miller) wife.

General Hospital’s Kim Nero (Tamara Braun) meets with Drew Cain (Billy Miller) in Oscar’s meadow. Drew is upset because Kim drugged him. Kim is ready to face the consequences even if she loses her medical license. Drew doesn’t want to prosecute Kim, he wants her to get some help. Kim tells Drew she saw a therapist today. Drew and Kim head to the Quartermaine mansion.

General Hospital’s Josslyn arrives at the Quartermaine’s for the reading. Monica hugs Kim and tells her how nice it is to see her. Michael arrives and begins to read Oscar’s will. Oscar leaves Leo an instrument. Michael gets a photo of himself and Wiley Cooper-Jones (Theo And Erik Olson).

Oscar leaves Monica a book and wants her to visit his hometown. Oscar leaves Cameron his car. Oscar gives Josslyn her compass back. Josslyn says she can’t do this and leaves. She goes to the meadow and remembers when she gave Oscar the compass. Josslyn tells Cameron that Oscar won’t find his way home this time. Michael gets a text saying Cameron is with Oscar.

General Hospital #GH Spoilers: The Walls Are Closing In On Shiloh https://t.co/ecy7RpY3qn

Oscar gives Drew back the glass he stole to run the DNA test. Oscar returns his bear to Kim and tells her what a good mom she was to him. Oscar has left his voting shares to Shiloh. Shiloh walks in saying he hopes he didn’t miss anything.