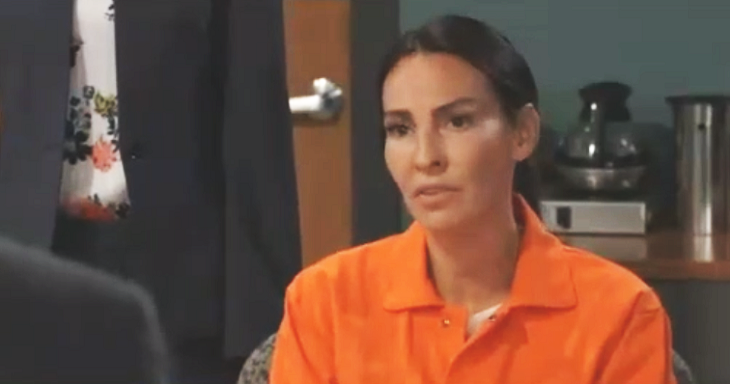 “General Hospital” spoilers for Thursday, July 11, tease that Hayden Barnes (Rebecca Budig) will have a tense exchange with Hamilton Finn (Michael Easton). She would barely speak to Finn at the wedding reception, and she won’t have much to say now either. Hayden will think they should just leave it at that and move on, so Finn should be taken aback by how cold she is.

Next, Elizabeth Baldwin (Rebecca Herbst) will contemplate Liesl Obrecht’s (Kathleen Gati) drunken comment. She’ll feel like Liesl obviously knows something thanks to that remark about “Wiley Cooper-Jones’” real father. Liz will speak to Lucas Jones (Ryan Carnes) on Thursday, so he’ll explain all the chaos going on with Shiloh Archer (Coby Ryan McLaughlin).

Once Lucas offers updates, Liz may get the wrong idea about Liesl’s spilled secret. She may think Liesl was talking about Shiloh. As for Franco Baldwin (Roger Howarth), he’ll go straight to the source for answers. Liesl will be in a hospital bed at GH, but she’ll be sober and alert. Franco will ask what Liesl was trying to tell him about “Wiley’s” real father, but she may cover her blunder for now.

In lockup, Willow Tait (Katelyn MacMullen) will get some support from Harrison Chase (Josh Swickard). He’ll pop in and let Willow know he wishes he could do more to help. It seems Willow may have to return the favor and give Chase some support, too. He’ll be disheartened by the legal system and all the roadblocks they’re facing.

Chase will contend that this mess makes him want to turn in his badge and go to work for Sonny Corinthos (Maurice Benard). Thankfully, he won’t! GH fans wouldn’t want our sweet Chase getting in over his head like that. Instead, Chase will find the strength to keep up the good fight – and the same goes for Willow.

Over with Mac Scorpio (John J. York) and Robert Scorpio (Tristan Rogers), they’ll listen to Harmony Miller’s (Inga Cadranel) story. Harmony will insist that she’s willing to share everything, so they should get the full scoop on Douglas Miller. Jason Morgan (Steve Burton) is counting on Harmony to be the secret weapon that brings Shiloh down.

General Hospital Spoilers – Sam McCall Will Get Some Much-Needed Relief

Later, “General Hospital” spoilers say Sam McCall (Kelly Monaco) will get some relief while Willow moves toward a sense of healing. Does that mean Harmony’s efforts will pay off? Shiloh’s arrest may be looming, but he’ll have more drama to cause for now. Oscar Nero Quartermaine (Garren Stitt) left Shiloh his ELQ shares, so Kim Nero (Tamara Braun) will object in Thursday’s episode.

Shiloh will look smug as he wonders if Kim really wants to second-guess her son’s dying wish. It won’t be long until Drew Cain (Billy Miller) gets involved, which is when things will take a physical turn. “General Hospital” spoilers say Drew will shove Shiloh across the room, so major drama will erupt at the Quartermaine mansion.

General Hospital #GH Spoilers: The Walls Are Closing In On Shiloh https://t.co/ecy7RpY3qn

It sounds like some exciting scenes are on the way. We’ll keep you posted as other news and rumors emerge. “General Hospital” spoilers say another terrific episode’s coming up. We’ll give you updates as other GH news and rumors emerge. General Hospital airs on ABC. As always, more detailed Spoilers and Breaking news will appear here on Hollywood Hiccups!