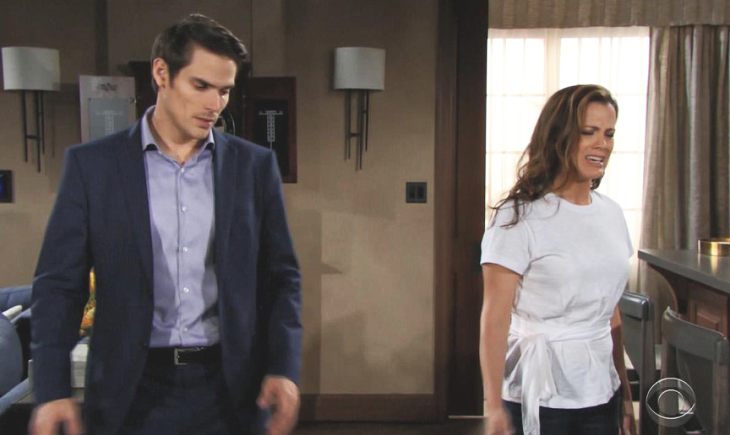 According to “The Young and the Restless” spoilers, Adam Newman (Mark Grossman) will do what he thinks he must to reclaim Connor Newman (Gunner and Ryder Gadbois), even if that means selling out Chelsea Newman (Melissa Claire Egan).

After Calvin Boudreau’s (John Burke) death, Adam made it known to Chelsea that he wants her and Connor back. But Chelsea thinks otherwise.

Young And The Restless Spoilers – Under Death Investigation

When Chelsea returned, Adam immediately wanted to have his family back. So when Calvin suddenly died, he told Chelsea that the “roadblocks” were gone, and they could once again be together with Connor.

Young And The Restless Spoilers: Chelsea Reeling From Husband’s Death – Turns To Nick For Comfort

When Chelsea dismisses him and tells him she doesn’t want Connor to know he’s a Newman, Adam devises an evil plan to destroy Chelsea.

Spoilers showed that Chelsea will be under investigation for the death of Calvin. Chelsea was the last person Calvin was with before he died. According to her, he was fine before they went to bed and when she woke up, she found him dead already.

Young And The Restless Spoilers – Another Spin On The Story

However, Adam has another spin to the story. He will give Paul Williams (Doug Davidson) a reason to think Chelsea was involved in Calvin’s death. With Paul possibly considering Calvin’s death as murder and Chelsea being the last person Calvin was with before his demise, she will be treated as a suspect – all thanks to Adam.

Viewers may recall that Adam and Calvin had an off-screen conversation, which made the latter realize that Adam should have custody of Connor, so and and Chelsea could have a baby of their own. Of course, Chelsea became furious when he told her about it, and the conversation resulted in an argument.

The Young and the Restless Spoilers: Will Victor Newman’s Illness Kill Him? @celebratesoaps https://t.co/tt7Yg0JwHg

This piece of information can be used against Chelsea, especially since it all happened hours before his death. Adam will tell Phyllis Summers (Michelle Stafford) that Chelsea made the mistake of crossing him by keeping his son away from him. Could this mean he’ll really frame her for Calvin’s death? Will he go that far just to get custody of his son?