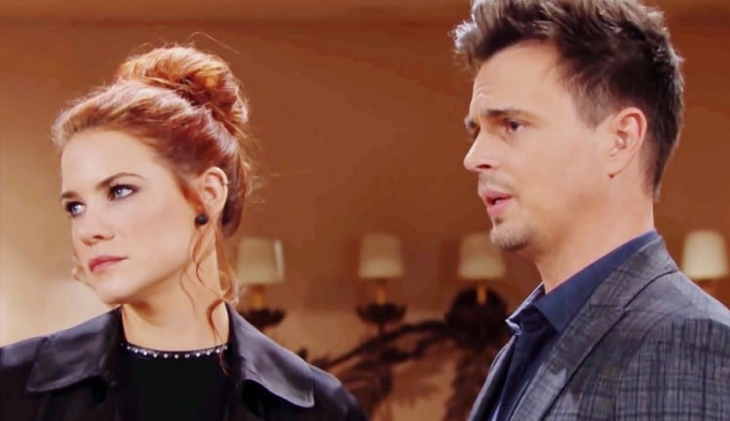 The Bold and the Beautiful (B&B) spoilers for Friday, July 12, tease that Sally Spectra (Courtney Hope) will get sneaky to score some alone time with Wyatt Spencer (Darin Brooks).

Flo Fulton (Katrina Bowden) has had her claws latched onto Wyatt and she never leaves his side. She has made it pretty difficult for Sally to talk to Wyatt about their relationship.

Sally will send Flo on an errand, which gives her some alone time with Wyatt. The Bold and the Beautiful spoilers state that Sally will declare her love for Wyatt, suggesting they should reunite.

Bold And The Beautiful Spoilers: Thomas Tricks Hope To Get Her To The Altar Faster

Of course, Wyatt will not be open to that just yet. He is so focused on the idea of being with his first love and beginning a life together.

The fact is Sally sees something in Flo that Wyatt can’t seem to see. She sees that she isn’t as perfect as he believes she is. However, Sally will leave Wyatt’s side and reveal that when everything goes South, she will be there waiting to pick up the pieces. Little does Sally know, that may be coming sooner than she thinks.

The Bold and the Beautiful spoilers say that Thomas Forrester (Matthew Atkinson) will find himself scrambling to make Hope Logan (Annika Noelle) his wife, after a heated exchange with Xander Avant (Adain Bradley) and Zoe Buckingham (Kiara Barnes). He will urge Hope that they have no reason to wait to get married. They should get married immediately.

Nothing will change Hope’s mind on being a mother. She will agree to get married quickly. B&B spoilers suggest that Hope feels the pressure, but her need to be a mother is so strong that she ignores all the signs that she should slow down and think over her decision to marry Thomas.

Even though Hope acknowledges that she doesn’t love Thomas, she decides to push the wedding ahead and get married immediately. Brooke Logan (Katherine Kelly Lang) and Liam Spencer (Scott Clifton) will do everything they can to stop Hope from making the biggest mistake of her life!