Bold And The Beautiful Spoilers: Xander Gives Zoe An Ultimatum – Relationship On The Line 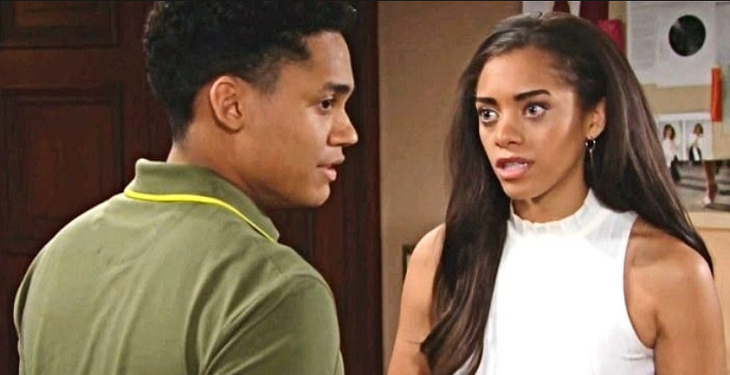 Bold and the Beautiful spoilers tease that there is trouble ahead for Zoe Buckingham (Kiara Barnes) and Xander Avant (Adain Bradley). As B&B viewers know, these two are in a world of trouble right now, as they both know that Hope Logan (Annika Noelle) and Liam Spencer’s (Scott Clifton) daughter is alive. That would be bad enough, but they’ve also got Thomas Forrester (Matthew Atkinson) to deal with.

But Thomas’ routine is starting to get old for Xander. While Zoe would be ok with keeping the secret forever, since she doesn’t want her father Reese Buckingham (Wayne Brady) to go to prison, Xander thinks the truth needs to come out. And it’s causing tension between Zoe and Xander.

Bold And The Beautiful Spoilers – Relationship Is At The Breaking Point

Their relationship is already a bit strained over the situation, but things are going to get worse when Xander decides to confront Thomas about his role in Emma Barber’s (Nia Sioux) death. As B&B viewers know, Xander watched the surveillance footage at Forrester Creations, and he knows that Thomas followed Emma out of the building shortly before her fatal accident.

But when Xander confronts Thomas, B&B spoilers say that Zoe will step in and defend Thomas against his accusations. That will really make Xander’s blood boil. Xander feels he’s given Zoe every opportunity to realize that the truth about Hope and Liam’s daughter needs to come out, and yet she still wants to keep the secret, plus she’s now defending Thomas.

And that will lead to a tense interaction between Zoe and Xander. According to B&B spoilers, Xander will lose it and give Zoe an ultimatum. It certainly sounds like Xander will tell Zoe that if she doesn’t fess up and tell the truth, then he will…despite the consequences.

This leads us to wonder whether Zoe and Xander’s relationship is going to survive. Certainly, if Xander does spill the baby swap secret, then Zoe’s going not only going to be upset, but she probably will go to prison, which would likely end their relationship.

And even if Xander doesn’t end up spilling the beans, the fact that he gives Zoe an ultimatum may in and of itself lead to a breakup.

Bold and the Beautiful Spoilers: Liam and Brooke Fight To Save Hope From Thomas https://t.co/TOreVt7LcB pic.twitter.com/3cd5bcCHto

It will be interesting to see what happens with this young couple as the drama involving the baby secret and the fallout from Emma’s death continues. Do you think Zoe and Xander’s relationship is doomed?