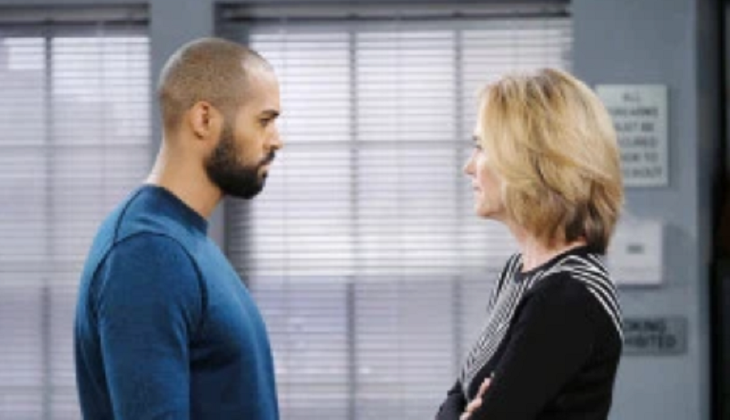 Xander claims that Kate is lying and is unreachable on a business trip. Xander tells Eli he has to turn him loose and demands to speak to the commissioner now. Eve asks Eli if he’s checking in with Hope now. Eve tells Eli it seems like Hope has a direct line to the police station.

Days of Our Lives Hope Brady promises to stall Eve Deveraux (Kassie DePaiva). Hope accuses Eve of almost getting Ciara Brady (Victoria Konefal) killed. Eve looks for Jack Deveraux (Matthew Ashford) who has disappeared. Hope tells Eve that several people almost got killed because of her and accuses her of stealing the phone from evidence.

Eve asks Hope what would make her think she took Claire Brady’s (Olivia Rose Keegan) phone. Hope tells Eve she is using the police department to cover up crimes. Eve threatens to bring Hope up on charges. Eve comes in to speak to Xander and threatens Eli. Eve refuses to help Xander, who threatens to go to Jack. She allows Xander to leave. Eli calls Hope and tells her Xander is on the loose.

Days of Our Lives Stefan Dimera (Brandon Barash) tells Nicole Walker (Arianne Zucker) that’s she’s fired. Nicole says this is her company. Nicole threatens to call the newspapers and tell them about Stefan and Gabi’s affair. If Nicole goes down, she’s taking Dimera with her. Gabi tells Stefan that Nicole is desperate, Nicole calls Gabi a whore. Stefan tells Nicole she has been erratic and unpredictable. He tells Nicole she insisted on being ready to return to work when she didn’t even book the venue.

Stefan tells Nicole that she is just not ready and that she should leave, but she argues with him. Nicole threatens to sue for wrongful termination. Nicole attacks Stefan, Abe Carver (James Reynolds) comes in and breaks up the fight. Stefan threatens to call the cops on Nicole. Abe tells Stefan that calling the cops is not a good idea. Nicole claims Stefan fired her for no reason. Stefan tells Abe that Nicole is too unstable to run Basic Black. Abe tries to reason with Nicole.

Nicole asks Abe if he’s blind or stupid; this is all a bid to get rid of her. Nicole leaves telling Stefan and Gabi they will not get away with this. Abe tells Stefan this is going to look bad for the company, Stefan says he will go public with what Nicole has done. Stefan needs Nicole to make a statement, or he will call the police. Gabi and Stefan move to plan the party. She wants Stefan to let her run Basic Black as well. Stefan asks Gabi if she’s been using him. Gabi tells Stefan his raw naked power is what drew her to him.

Days of Our Lives, Kristen Dimera (Stacy Haiduk) trashes her room at the Salem Inn before coming upon her gun in the dresser drawer. Kristen rants about being tired of everyone getting in her way and plans to get what she wants no matter what she has to do. Abe comes to the room and finds it trashed.

Days of Our Lives Maggie Kiriakis (Suzanne Rogers) finds Victoria Kiriakis’ (John Aniston) bottle of scotch under the sofa in the living room. Maggie pours herself a drink, Sarah Brady (Linsey Godfrey) catches her with it. Maggie explains that she found the alcohol under the couch where Victor hid it. Maggie defends Victor, Sarah doesn’t buy it. Sarah thinks Maggie has her drinking under control.

Maggie admits to being scared. She feels like she has to start all over again. Maggie thinks she needs help. Sarah asks Maggie if she needs to go to rehab. Sarah tells Maggie about a new program the hospital has; it will only be for a few days. Maggie thanks Sarah for looking out for her. Maggie tells Sarah she has been judgemental of Rex Brady (Kyle Lowder) and promises to change.

Xander comes to the mansion looking for a drink, Sarah tells Xander she got rid of it. He tells Sarah he saw Chloe with the necklace and how much it hurt him. Sarah opens up to Xander about Maggie and then regrets it. Xander promises to keep quiet and tells Sarah he needs a woman like her in his life. Sarah wants to let Xander confide in her; he says Rex wouldn’t approve. Sarah has to go to an elderly patient at the hospital. She explains to Xander how bad death by starvation is. Xander bags food to take to Ted and Kate, Hope follows Xander when he leaves the mansion.