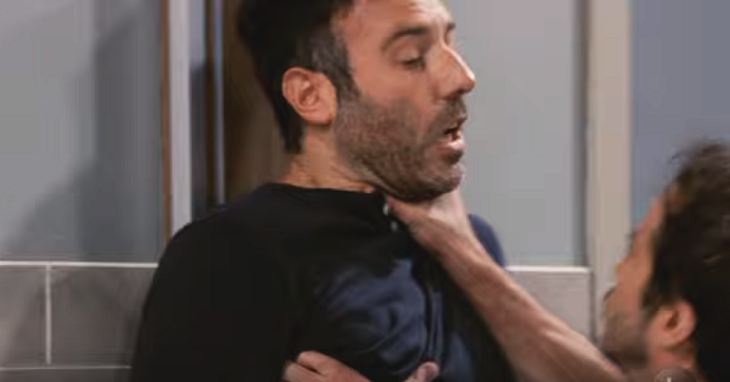 “General Hospital” spoilers for Friday, July 12, tease that Dev Cerci (Ashton Arbab) will get on Sonny Corinthos’ (Maurice Benard) bad side. Sonny’s done a lot to help Dev, so he won’t appreciate the drama that arises.

There’ll be questions about what Dev had in mind when he came to town, but it seems the conflict will be minor. Dev will manage to show his gratitude and patch things up with Sonny soon enough.

Over with Peter August (Wes Ramsey), he’ll mention walking into the enemy’s lair. Peter will be a bit thrown by being at the WSB facility, but Maxie Jones (Kirsten Storms) will keep her eye on the prize. She’s determined to spark a reunion for Dante Falconeri (Dominic Zamprogna) and Lulu Falconeri (Emme Rylan), so she’ll prepare to confront Dante as soon as possible.

Meanwhile, Lulu will get some guidance from Laura Webber (Genie Francis). “General Hospital” spoilers say Laura will think Lulu needs to take action. She’ll encourage her daughter to go after Dante and bring him back to Port Charles. Lulu may have some reservations about that, but Laura will feel like Lulu and Dante belong together. She’ll hope Lulu accepts the advice eventually.

Hayden will wonder if she’s under arrest, but Chase will just want her cooperation. He’ll run down Hayden’s file and determine that she’s done some awfully messed-up things. Chase won’t understand how Finn almost married her, but Hayden will just want to deal with this and go. She’ll assure Chase she wasn’t behind the shove that sent Liesl Obrecht (Kathleen Gati) overboard.

Jasper “Jax” Jacks (Ingo Rademacher) will also get grilled on Friday. Nina Reeves (Cynthia Watros) will try to get a better grip on Jax and Hayden’s bond, but he won’t offer a ton of info. However, Jax should at least admit their romantic involvement is minimal. Hayden kissed Jax at the wedding reception, but that was more about taking a dig at Finn and proving she’d moved on.

Valentin Cassadine (James Patrick Stuart) will fume as Nina and Jax get closer, so he’ll work hard to make sure this bond doesn’t last long. Back at the PCPD, Michael Corinthos (Chad Duell) will visit Willow Tait (Katelyn MacMullen) in lockup. She’ll excitedly share some big news, so this should be about Harmony Miller’s (Inga Cadranel) turnaround. Willow will hope the jig is almost up for Shiloh Archer (Coby Ryan McLaughlin).

At GH, Lucas Jones (Ryan Carnes) won’t be able to take the button-pushing anymore. He’ll physically attack Shiloh, so the cult leader will call for Lucas’ arrest. Shiloh also just got his hands on DNA test results, which means he’ll open them up and presumably face a shocker before long.