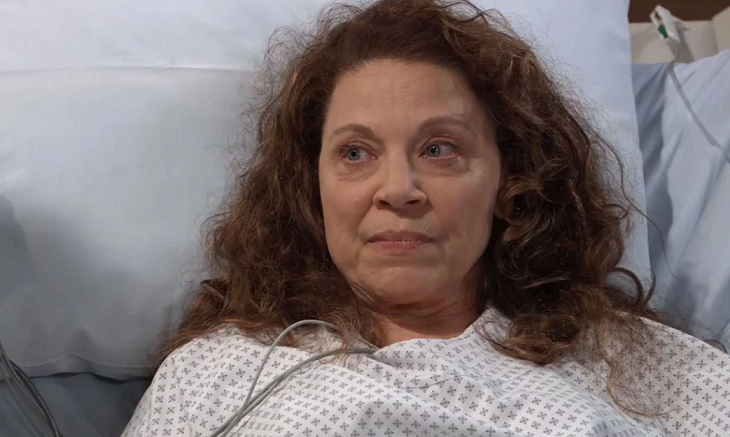 Hayden offers Finn a donut, he refuses but wants answers from Hayden. Finn needs to say something to Hayden about the child they lost. Hayden tells Finn they need to move on from that. Finn wants to tells Hayden about his engagement, she already knows.

Finn is surprised that Hayden kept up with what is happening in Port Charles. Hayden wants to have dinner with Finn and Anna Devane (Finola Hughes). Finn tells Hayden that Anna is out of town for a while. Finn wants to know why Hayden left the letter and then wanted to meet him in Rome. He tells Hayden he knows she is keeping something from him. Chase arrives and needs to talk to Hayden.

General Hospital’s Franco Baldwin (Roger Howarth) and Hamilton Finn (Michael Easton) are with Liesl Obrecht (Kathleen Gati). Finn tells Liesl he had to check for infectious diseases. Liesl wants a guard posted outside her door since someone tried to kill her. Franco calls the PCPD to send someone over to take Liesl’s statement. Franco tells Liesl about their conversation, and she tries to change the subject. Liesl tells Franco she was lying about secrets she does not possess.

General Hospital’s Alexis Davis (Nancy Lee Grahn) announces that Oscar Nero (Garren Stitt) left his ELQ voting shares to Shiloh Archer (Coby Ryan McLaughlin). Alexis promises to dispute this decision in court. Shiloh hopes this will bring him and Drew back together. Drew shoves Shiloh down and says he doesn’t think so. Drew Cain (Billy Miller) tells Shiloh he doesn’t want to hear his sons name out of Shiloh’s mouth again. Shiloh uses Kim Nero and tries to get Kim to side with him. Both Kim and Olivia Quartermaine (Lisa LoCicero) tell Shiloh they won’t let him take advantage of Oscar’s naivety.

Michael Corinthos (Chad Duell) says the bequest is invalid and explains that Oscar changed his mind and set up the kids foundation. Shiloh demands his bequest, and Monica demands he leave the house. Michael overhears Shiloh on the phone and learns the DNA tests are in at GH. Kim walks out on the talk about ELQ. Alexis corners Michael, and he tells her about Shiloh’s phone calls. Michael calls Jason and tells him about the ELQ stock. Michael tells Jason that Shiloh is on the way to GH to pick up DNA test results. Jason head to GH as Shiloh picks up the results. Lucas warns Shiloh to stay away from Wiley.

General Hospital Spoilers – Jason Morgan Turns Himself In To The PCPD

General Hospital’s Jason Morgan (Steve Burton) turns himself in at the PCPD with Lorraine “Harmony” Miller (Inga Cadrenal) in tow. Harmony is using her given name and is there to testify against Shiloh. Harmony tells Robert Scorpio (Tristan Rogers) that being incarcerated has given her time to think and she has realized that someone has to bring Shiloh to justice a put an end to DOD. Harmony tells Sam that Shiloh has stalked Sam for years. She says she has proof that Shiloh killed her husband.

Harmony tells Robert and Mac Scorpio (John J. York) that he copied the book where Shiloh had paid off officials. Jason asks Robert is the drug prescription is enough. She goes on to give them details of the initiation. Harmony tells everyone that Shiloh has a prescription for the drug used in the tea used to drug the girls being initiated into DOD. Harmony wants nothing in return for her testimony; she only wants Shiloh stopped. Robert agrees to drop all charges against Jason and issue an arrest warrant for Shiloh.

General Hospital’s Harrison Chase (Josh Swickard) speaks to Willow Tait (Katelyn MacMullen) and tells her this is a bad day for justice. Willow says Shiloh is still out doing what he does best. Chase tells Willow that this makes him want to turn in his badge and work for Sonny. Chase is called away to take a statement. Chase goes to take Liesl’s statement.

Liesl tells Chase that she was on the deck and heard footsteps behind her. Chase goes over the guest list with Liesl. She accuses Hayden of pushing her overboard. Meanwhile, Harmony is brought to lockup and tells Willow she is going to try to save her grandson. Harmony says she had failed Willow her whole life and will protect her now.

General Hospital’s Lucas Jones (Ryan Carnes) approaches Liz who asks how Wiley Cooper-Jones (Theo and Erick Olson) is. Liz brings up school and Lucas gets quiet, Liz asks if Wiley is ok. Lucas tells Liz that Wiley is fine, but there may be an issue with his birth parents. Lucas can’t be rational about this.

Franco meets with Liz, and they decide they need to find out what Liesl knows about Wiley. Franco thinks Liesl is lying about Wiley, Liz is concerned about Wiley. Shiloh approaches Lucas and tells him he is taking Wiley home with him. Shiloh makes it clear he is there to pick up DNA test results.