Young and the Restless POLL: Was Chelsea Set Up For Calvin’s Murder? Vote Now! 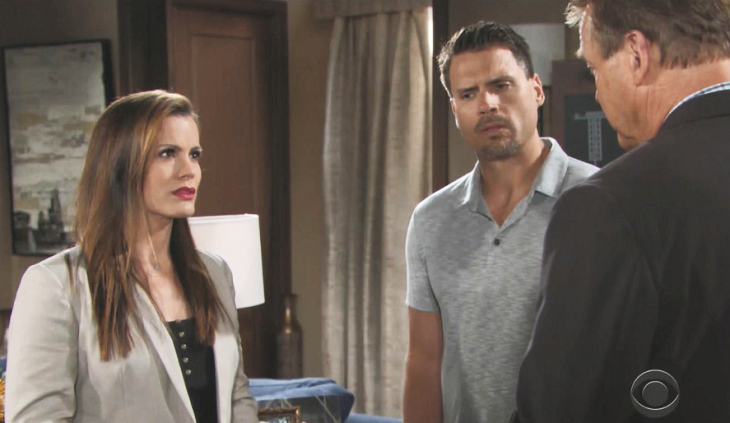 It appeared as though Calvin Boudreau’s (John Burke) death was tragic, but not a crime on ‘The Young and the Restless’. However, fans are right to wonder if Chelsea Boudreau (Melissa Claire Egan) has been set up for her husband’s murder!

The hardest of hardcore Y&R fans may recall that Gordon Thomson (who is now playing Daryl Tulane) previously appeared on the show in the late 1990’s, portraying secondary character Patrick Baker. Now, the veteran actor is embodying a person who appears tied to the time when Chelsea wasn’t living in Genoa City, Wisconsin.

After ‘Chalvin’ (the limited-run couple’s nickname offered for what was Chelsea and Calvin) had a major verbal disagreement in their GC Athletic Club suite, Chelsea found Calvin had died. Nick Newman (Joshua Morrow) was summoned for support. After he arrived, Adam Newman (Mark Grossman) and Phyllis Summers (Michelle Stafford) were seen peering in the room from the hallway.

Everyone blames Adam and Phyllis for everything. So one, or both are now able to be entangled in this crisis. But Daryl is the character to keep an eye on.

Young And The Restless Spoilers – Chelsea Newman Had To Move Forward

Thomson’s career in entertainment dates back to 1969, when he appeared as Alan Evans in the movie, ‘Explosion’. Along with many subsequent movie and television roles, Thomson first appeared in daytime as Aristotle Benedict White on the beloved ‘Ryan’s Hope’.

His soap stints also include ‘Santa Barbara’ (Mason Capwell), ‘Sunset Beach’ (A.J. Deschanel), ‘Passions’ (Hal Freeman), and ‘Days of our Lives’ (Walter, who had no last name). Thomson also appeared on the nighttime soap ‘Dynasty’ (Adam Carrington) and its spinoff ‘The Colbys’, as the same character.

Adam never considered that Chelsea would have remarried, or that her noticeably older husband would have adopted their son, Connor Newman, now Boudreau (Gunner and Ryder Gadbois). But Adam’s perceived death forced Chelsea to move forward and seek stability.

Chelsea’s explanation to Nick of how she and Calvin came to meet and then marry isn’t exactly a love story. So it stood to reason that ‘Chalvin’ was a short-time duo, as it proved to be.

Nick’s current battle for custody of Christian Newman (Jude and Ozzy McGuigen) has now been furthered by his draw back to Chelsea. For her part, the widow Boudreau has taken to Nick, rather than Adam, because her goal is to protect her child.

It would seem too easy to have Calvin simply die off with no connected conflict, so possibly Chelsea is being set up for his murder by a foe who’s in GC?

Fans of ‘The Young and the Restless’ rightfully express their opinions on a regular basis. So, was Chelsea set up for Calvin’s murder? Please vote in our poll below!