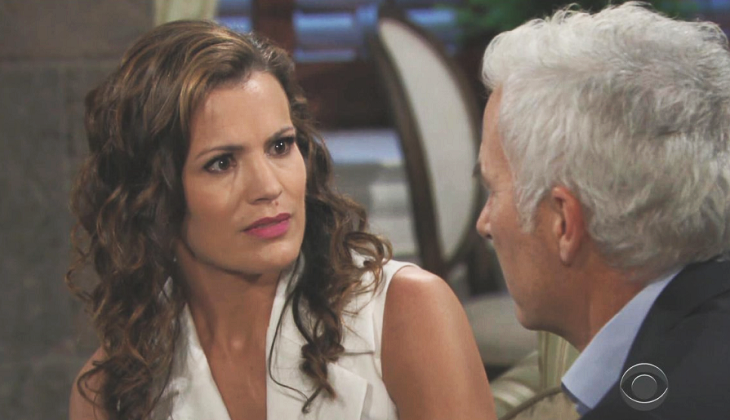 The Young and the Restless (Y&R) spoilers tease that Chelsea Newman (Melissa Claire Egan) may be pulling a con with her husband Calvin Boudreau (John Burke). While it looks like Calvin is dead, Y&R spoilers suggest it may not be the case.

Is it possible Calvin is not really dead, and Chelsea could have another agenda with Nick Newman (Joshua Morrow)? Here’s what you can expect to see on Y&R in the coming weeks.

Chelsea’s new husband died on Friday, July 5 and he left her in shambles as she had to deal with the guilt of their fight just before his death. She told Nick that she hoped his death was peaceful and not painful. Of course, everyone feels terrible for her but is she being honest?

Y&R spoilers tease that Chelsea has a long history of scamming others. She often will appear honest and genuine when she is aiming to con or pulling one over someone. It’s clear that Chelsea has an agenda and that’s why she is in Genoa City, but so far, she hasn’t said what that agenda is.

It appears that Calvin is dead. Paul Williams (Doug Davidson) confirmed his death, but does that mean he is really dead? Under normal circumstances, yes, but in a soap opera, anything is possible.

Young and the Restless fans picked up that she showed up in town and she latched on to Nick pretty quick. And, Calvin and Adam Newman’s (Mark Grossman) meeting seemed calculated.

The buzz in social media is that she and Calvin could be running a scam and targeting Nick, for whatever reason. Chelsea’s move is not clear yet. One thing that is apparent is she has Nick roped in and he would do anything for her. And, at this point, he might turn his head if her plan is some con or scam.

Let’s hope that she isn’t going to hurt Nick again, as he is pretty shattered at the moment. Even if Calvin is really dead, that doesn’t mean Chelsea couldn’t be using her connection to the Newman family to get ahead in some way.

Do you think Calvin could be still alive? Don’t forget to come back later for more The Young and the Restless (Y&R) spoilers, news, and casting updates!