Bold And The Beautiful Spoilers: Marriage In Trouble – Ridge Confronts Brooke Over Her Negativity Towards Thomas 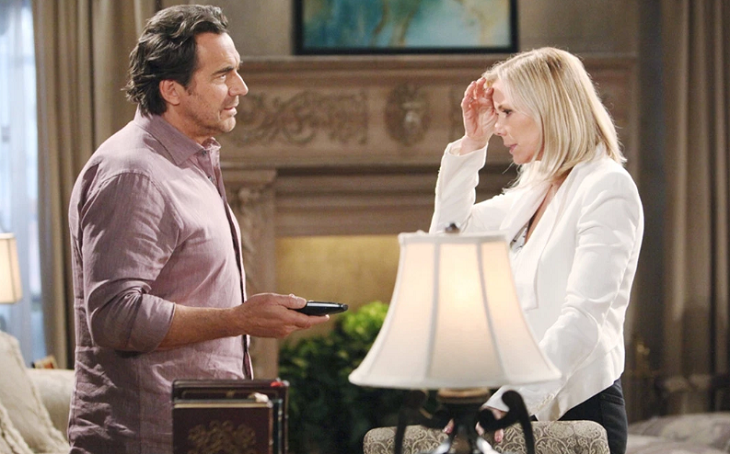 The Bold and the Beautiful spoilers tease that things are soon going to get tense between Ridge Forrester (Thorsten Kaye) and Brooke Forrester (Katherine Kelly Lang). These two rarely see eye to eye when it comes to their children’s love lives. They spent the better part of last year wanting different things for their kids.

As B&B viewers know, Brooke wants nothing more than for her daughter Hope Logan (Annika Noelle) to be with Liam Spencer (Scott Clifton). Brooke was utterly dismayed when Hope decided to end her marriage to Liam and give up on her dream of having a family of her own. In Brooke’s mind, Hope and Liam could still have a shot at happiness.

Ridge, on the other hand, wants Liam to be with his daughter Steffy Forrester (Jaqueline MacInnes Wood), and he thinks that Hope should be left to her own devices to be with whomever she wants. And now Hope has decided to marry Ridge’s son Thomas Forrester (Matthew Atkinson). That delights Ridge, but Brooke is far from pleased.

Brooke strongly suspects that something is off with Thomas, and she’s absolutely right. As B&B viewers know, Thomas is concealing the fact that Hope and Liam’s daughter is alive, and he has completely manipulated situations to get Hope to agree to marry him. He used his son Douglas Forrester (Henry Joseph Samiri) as a pawn in the whole scheme, and there seems to be no end to what he’ll do.

And worse, Thomas was heavily involved in Emma Barber’s (Nia Sioux) death. He chased and tailgated her as she was on her way to tell Hope the truth about her daughter being alive, and he contributed to Emma’s fatal accident. Brooke is right to be worried about Thomas and his obsession with Hope!

Well, according to B&B spoilers, the whole situation is going to start to cause some real tension between Brooke and Ridge. Brooke doesn’t like the fact that Thomas and Hope are engaged, and she is trying anything she can to get her daughter to reconsider the decision to marry Thomas. Ridge won’t like that, and he especially won’t like Brooke’s negativity toward his son.

Bold And The Beautiful Spoilers – Ridge Forrester Will Become Fed Up

Of course, Ridge doesn’t know how maniacal and manipulative his son is. Ridge just hasn’t seen that side of Thomas – what he sees is a single father who is trying his best to take care of Douglas and build a future for him. Ridge thinks it’s great that Thomas loves Hope, and he’d like nothing more than to see the two of them get married and be happy.

Look for growing tension between Ridge and Brooke in the coming days, and look for Ridge to finally get fed up with his wife’s negativity toward Thomas. The Bold and the Beautiful spoilers say that Ridge will confront Brooke about her constant skepticism and concern about Thomas, and the result will likely be a huge argument.

It will be interesting to see how (or whether) Bridge are able to resolve their difference of opinion. Brooke certainly isn’t going to back down in her opinion, and Ridge isn’t going to quit defending his son, so it should lead to some major conflict. Do you think this whole situation will lead to marital problems for Bridge?