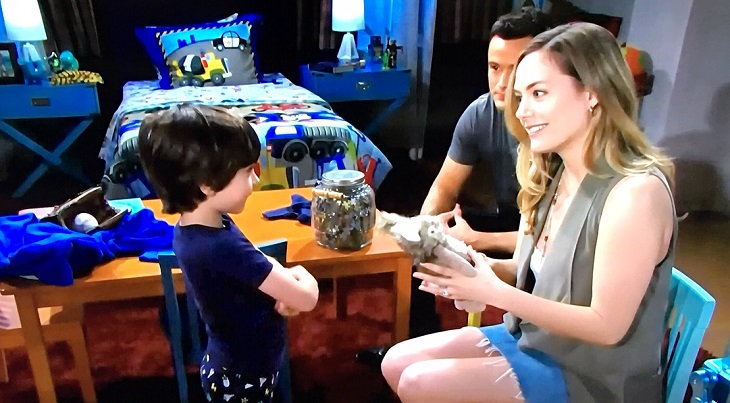 The Bold and the Beautiful (B&B) spoilers tease that Thomas Forrester (Matthew Atkinson) will take his manipulation a step farther on Monday, July 15 when he sets his sights on his son, Douglas Forrester. Apparently, he uses his boy again to push Hope Logan (Annika Noelle) to marry him.

Thomas knows that Hope is completely committed to him and she could change her mind at any point. She may decide to turn her back on him and get some therapy or just spend some alone time to recover from her baby’s death and her annulment with Liam Spencer (Scott Clifton).

Of course, Thomas cannot let that happen. Bold and the Beautiful spoilers say that Thomas gets Douglas to ask Hope to be his mommy immediately. It works like a charm too, as Hope agrees to marry Thomas right away. They plan to get married by the end of the week.

Bold And The Beautiful Spoilers – Thomas Forrester Is Taking Advantage

If all goes according to plan, Thomas and Hope will be married. B&B fans have big problems with their pairing and Executive Producer and Head Writer Bradley Bell has agreed viewers should not support them because he is clearly taking advantage of sweet Hope.

At the Forrester mansion, Ridge Forrester (Thorsten Kaye) is having it out with Brooke Logan (Katherine Kelly Lang) over Thomas and Hope’s wedding.

She doesn’t think they should rush into marriage, especially because her daughter doesn’t love his son. The only reason Hope wants to get married is because she adores Douglas. She points out that’s a terrible reason to wed.

The Bold and the Beautiful spoilers state that Ridge asks Brooke to accept Thomas into her family as Hope has decided to marry him. It will be something very difficult for her as she knows that Hope is only marrying him to be a mother to Ridge’s grandson.

Bold and the Beautiful POLL: Who Is Most Likely To Expose Thomas? @celebratesoaps https://t.co/VjARbEbCn9

Even so, Brooke agrees she would try to accept it. However, she will say that she cannot help but feel worried that her daughter is not dealing with her feelings. She is terrified that she is not doing well, and she is putting on a brave face so the family doesn’t worry about her.