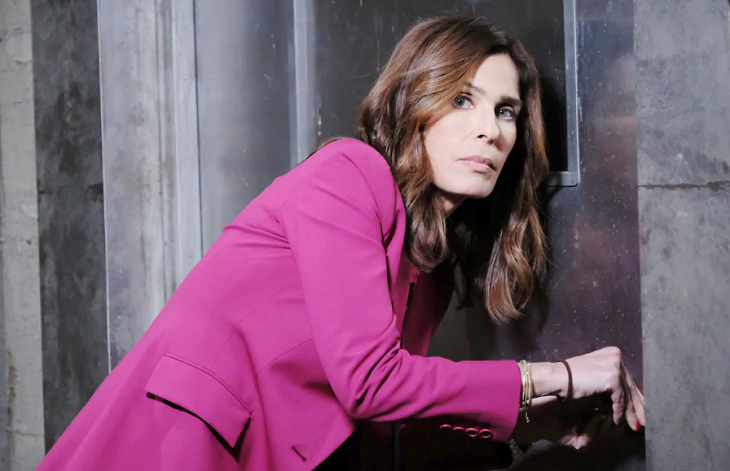 Days of Our Lives spoilers tease that Hope Brady (Kristian Alfonso) will follow Xander Cook Kiriakis (Paul Telfer) to the secret room at the DiMera mansion where Kate Roberts (Lauren Koslow) and Ted Laurent (Gilles Marini) are being held.

She doesn’t buy Xander’s story about the necklace he gave Sarah Horton Brady (Linsey Godfrey) as a wedding present and passed on to Chloe Lane (Nadia Bjorlin) by Rex Brady (Rex Lowder) in a recent Days of Our Lives episode.

Xander had told Hope that he ran into Ted, but denied knowing him, in a pawn shop trying to hock the necklace and had made him a better offer than the pawn shop dealer.

Then Hope became suspicious of Xander having two cell phones, one of them being Kate’s and ringing as she was questioning him. He denied it being Ted’s, which actually was the truth since it was Kate’s!

Days Of Our Lives Spoilers: Xander Reconsiders His Plan To Let Ted And Kate Live

Meanwhile, Kristen DiMera (Stacy Haiduk) is holding a gun on the trapped twosome after revealing herself to them. Kate is talking her down and trying to negotiate with her. She tells Kristen she doesn’t don’t need to kill her because she and Ted can help her.

Kate and Ted may tell her they have leverage, since they know Holly Jonas (Scarlett and Harlow Mallory) is alive and they also know she is impersonating Holly’s mother Nicole Walker (Adrienne Zucker). Can they bargain with her in exchange for their lives?

Kristen is likely ranting and raving about Xander having been too soft to finish the job and that she has to kill them because they know too much, but Kate argues Kristen into a stalemate.

Xander likely heads over to finish the job of killing Ted and Kate, after having a run-in with Kristen already. This was after she discovered the pair in the room the first time earlier, as Nicole when Stefan DiMera (Brandon Barash) sent her for champagne for a joint event for Basic Black and Gabi Chic in an earlier Days of Our Lives episode. But what he doesn’t know is that Kristen has gotten there ahead of him, and Hope is following behind him.

Days Of Our Lives #DOOL Spoilers: Nicole And Stefan In Fierce Fight – Will Stefan Come Out On Top? https://t.co/A1yRuKKzg9

Once he arrives at the mansion, he’s aware that Hope is trailing him and tries to give her the slip by heading for the secret room. He and Kristen take off, likely through the tunnels leading away from the room. Hope kicks down the door and finds Ted and Kate – but appearing to be in a compromising position. Ted may have some explaining to do, but they might just be hugging each other out of relief that Hope is there to rescue them!