Days Of Our Lives Spoilers: Kristen Reveals Herself And Prepares To Gun Down Ted And Kate 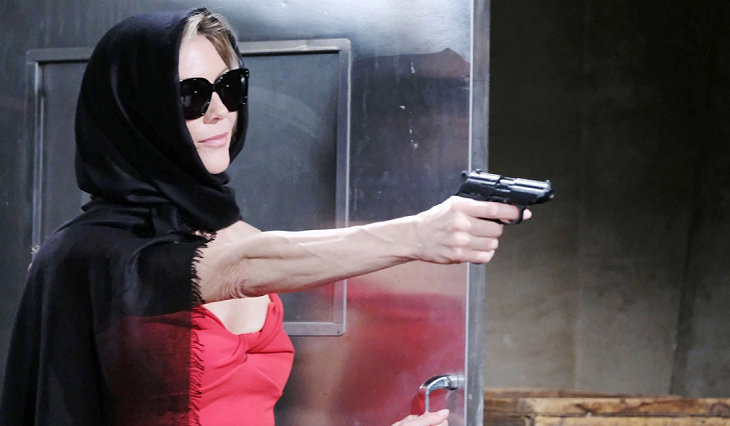 Days of Our Lives spoilers tease that Kristen DiMera (Stacy Haiduk) will reveal herself to the trapped Kate Roberts (Lauren Koslow) and Ted Laurent (Gilles Marini) on Friday, July 12. She will also reveal a gun pointed at their faces!

The two captives will be stunned to see Kristen alive, even though Kate had strongly suspected it.

A promo still shows Kristen, complete in the same red dress Kate found in the closet when she broke into “Nicole Walker’s” (Adrienne Zucker) suite at the Salem Inn.

She is holding a gun on the two as they obviously aren’t pointing their broken champagne bottles back at her, although they may have had them at the ready at first.

Days Of Our Lives #DOOL Spoilers: Nicole And Stefan In Fierce Fight – Will Stefan Come Out On Top? https://t.co/A1yRuKKzg9

Kristen, of course will go straight to telling them that because they know her secret, they will have to be killed. She may also rant about Xander Cook (Paul Telfer) going soft and his not having been able to complete the kill job that she gave him, and the possibility she may have to kill him too!

Everyone in Salem knows what Kristen is capable of, but in spite of that, Kate will try and talk her down and make a deal with her. She will tell Kristen that they can help her if she doesn’t kill them. Kate manages to buy herself and Ted some more time by arguing Kristen into a stalemate.

Days Of Our Lives Spoilers – Will The Pair Make A Bargain With The Devil?

Kate and Ted may both try to get out of Kristen where the real Nicole is, if she is alive, and the whereabouts of both Nicole and her daughter Holly Jonas (Scarlett and Harlow Mallory).

Knowing she is alive, they may possibly remind Kristen they have that fact as leverage. Kate might use she and Ted keeping those secrets as well as that Kristen is alive and impersonating Nicole as part of their “help” that Kate offers her.

Other Days of Our Lives spoilers tease that Xander is on his way there as well, followed closely by Hope Brady (Kristian Alfonso), which will lead to Ted and Kate’s rescue.