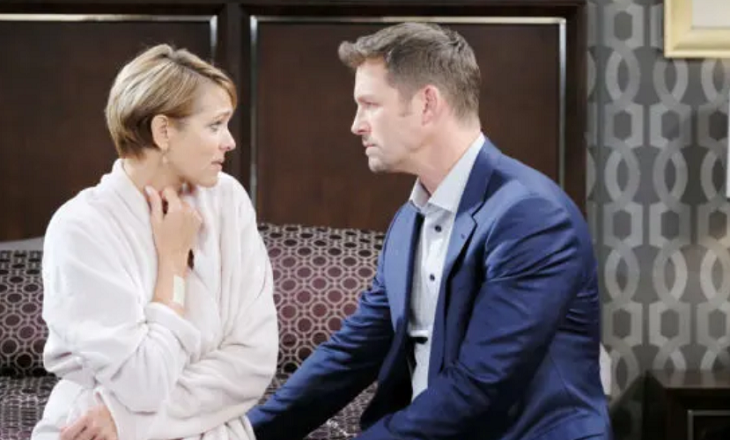 “Days of Our Lives” spoilers for Monday, July 15, tease that Stefan DiMera (Brandon Barash) will rush to his own defense. Ted Laurent (Gilles Marini) and Kate Roberts (Lauren Koslow) barely made it out of the hostage situation alive, so they won’t risk blowing it by going against orders. Kristen DiMera (Stacy Haiduk) wants Stefan to go down for this, which is why they just accused him of kidnapping.

Stefan will assure Hope Brady (Kristian Alfonso) that he had nothing do with Kate and Ted’s time in captivity. He’ll contend that he had no clue anyone was in the secret room, but Ted and Kate will stand by their claims. “Days of Our Lives” spoilers say Stefan will land in hot water as a result. It looks like he’ll be arrested on the spot, but he won’t be the only taken into custody.

Kristen didn’t protect Xander Cook (Paul Telfer) from the fallout, so the cops will arrive for him soon enough. DOOL spoilers state that Xander will be furious over Kristen’s betrayal.

Days Of Our Lives Spoilers: Maggie Horton Needs Help – Can Sarah Save Her? https://t.co/Tps3ZK7g0N pic.twitter.com/fKKprdrpJK

He’ll start plotting his revenge, but Kristen will concentrate on her goal of winning back the man she wants. Kristen’s obsessed with Brady Black (Eric Martsolf), so she’ll once again rev up her efforts to reel her ex in.

“Days” spoilers say Kristen will put on her “Nicole Walker” (Arianne Zucker) mask once again and hope she makes progress this time. She’ll do plenty of flirting and eventually escalate things as best as she can.

However, Brady won’t be receptive to “Nicole’s” steamy kiss and attempt at more. He’ll insist they need to respect boundaries for the sake of Eric Brady’s (Greg Vaughan) broken heart.

“Nicole” will maintain that she doesn’t care what Eric thinks or how she feels. She’ll fight hard for a reunion, but Brady won’t want to revive any conflict with Eric. He just won’t think it’s a good idea to go down that road again. That’ll leave Kristen frustrated and wondering how she’s going to pull off her plan.

Finally, Abe Carver (James Reynolds) will get some exciting updates. “Days of Our Lives” spoilers say Lani Price (Sal Stowers) and Eli Grant (Lamon Archey) will share the news of their engagement. They’ll get some congratulatory words and some sincere advice as they kick off this wonderful new chapter.