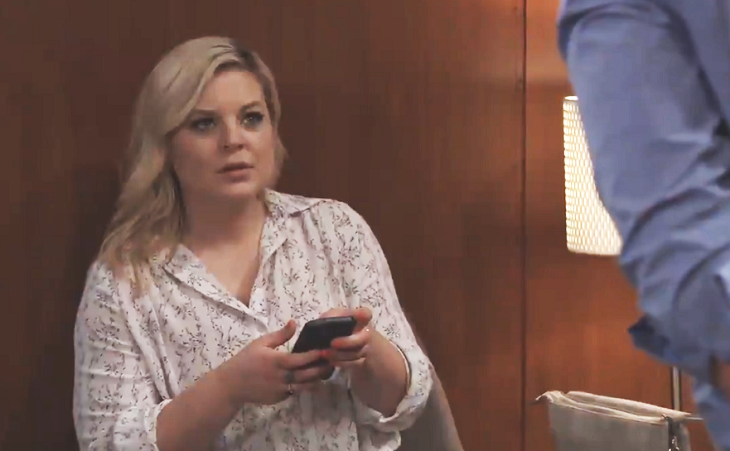 “General Hospital” spoilers for Monday, July 15, tease that Hamilton Finn (Michael Easton) will get some support from a friend. When he bumps into Alexis Davis (Nancy Lee Grahn), she’ll sense a troubled soul and push Finn to share. GH fans know Finn’s dealing with a lot now that Hayden Barnes (Rebecca Budig) is back in town. He may open up about the emotions he’s battling and get some guidance from Alexis.

Across town, Hayden and Laura Webber (Genie Francis) will have a sweet conversation. They’ll catch up on the latest happenings in Port Charles and discuss Spencer Cassadine (Nicolas Bechtel) as well. It seems Laura will still view Valentin Cassadine (James Patrick Stuart) as a dark cloud that hangs over Spencer. Try as he might, the kid can never quite let go of wanting to make Valentin pay for Nikolas Cassadine’s (last played by Nick Stabile) death.

That’ll give Hayden even more of a motive to stick to her plan with Jasper “Jax” Jacks (Ingo Rademacher) and take Valentin down. Over with Julian Jerome (William deVry), it appears he’ll want her to forget about all this psychic nonsense. Nevertheless, Ava will be adamant that she must speak with Kiki Jerome (Hayley Erin) – at least through Sibley Gamble’s (Veronica Cartwright) channeling.

Ava will argue that she needs this more than she’s ever needed anything, so Julian may relent. It’s not like he could stop his stubborn sister anyway. Kristina Corinthos-Davis (Lexi Ainsworth) will also have some cautionary words for Ava on Monday. She may contend that sometimes it’s better to look at the facts than believing what you want to believe. Everything that happened with Shiloh Archer (Coby Ryan McLaughlin) has undoubtedly left Kristina skeptical.

Next, Carly Corinthos (Laura Wright) will get updates from a concerned Jason Morgan (Steve Burton). He’ll worry that Dev Cerci (Ashton Arbab) is going to cause trouble for Sonny Corinthos (Maurice Benard) and everyone connected to him. Jason caught Dev trying to steal out of Laura’s purse, so he now as even more concerns about Dev creating big problems.

Speaking of big problems, Lulu Falconeri (Emme Rylan) wants to fix the ones in her marriage. She’s hoping Sonny will track Dante Falconeri (Dominic Zamprogna) down again and help her make things right. As Lulu continues her discussion with Sonny, Maxie Jones (Kirsten Storms) will face the shooting aftermath at the WSB facility. Someone was likely pumped with a bullet, but was it Dante or the agent?

Maxie’s warning suggested she wanted Dante to stop, so he may have grabbed the agent’s gun to shoot him. Then again, Dante might’ve turned it around on himself. A third option is that the agent regained control and shot Dante in self-defense. Regardless, Maxie will seem upset as she tells someone “he’ll be taken to General Hospital.”

Since GH is fairly far from this facility, the patient would need a reason to go there. Dante’s from Port Charles, so there’s the link. However, his injuries may not be life-threatening since it’s a long drive. It’s also possible Dante’s mental state will have to be reevaluated if the agent was the one gunned down.

Bottom line, Maxie has caused some serious drama with all her pressure. “General Hospital” spoilers say Lulu will unleash her wrath later in the week. We’ll keep you posted as other news and rumors emerge.