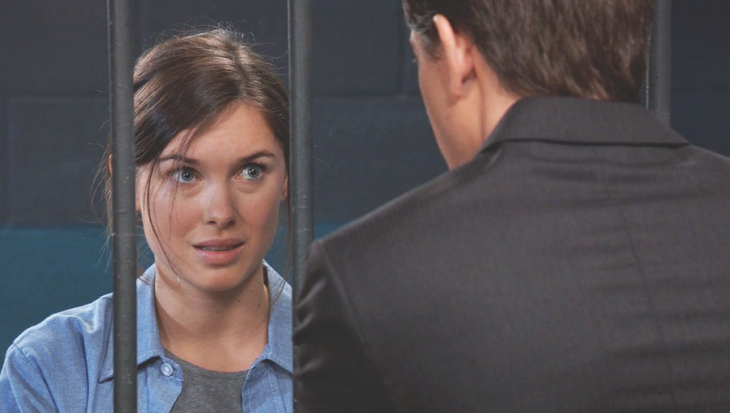 Maxie is shocked that the guards have guns, Peter explains they are trying to protect Dante. Dante refuses to see Maxie and Peter. Maxie refuses to take no for an answer and opens the door as a gunshot rings out.

General Hospital’s Jordan Ashford’s recovery is going smoothly, and she wants to go back to work. Shiloh confronts Lucas Jones saying he will be a better father to Wiley Cooper Jones (Theo and Erick Olson) than Lucas or Brad Cooper (Parry Shen). Shiloh pushes Lucas until he attacks him in front of Jordan and Curtis Ashford (Donnell Turner).

Shiloh demands Jordan arrest Lucas for attacking him. Jordan isn’t allowed to make any arrests; she’s not the commissioner. Sam tells Shiloh that Carol Lockhart (Mandy Musgrave) is going to testify against him and that Harmony Miller (Inga Cadrenal) gave a statement against him as well. Mac arrests Shiloh and tells him the charges. Shiloh is lead out and drops the DNA results; Sam gives them to Lucas. Lucas thinks the DNA test will give Shiloh custody of Wiley, Sam disagrees.

General Hospital’s Harrison Chase (Josh Swickard) takes Hayden Barnes (Rebecca Budig) in for questioning. Hayden calls Jasper Jacks (Ingo Rademacher) to get her a lawyer. Hamilton Finn (Michael Easton) goes to the PCPD and defends Hayden to Chase. Finn doesn’t believe Hayden could kill anyone. Chase is upset because Finn hasn’t confided in him about Hayden. Jax arrives, and Chase turns Hayden loose. Mac arrives with Shiloh and tells Chase what evidence they have against Shiloh. Mac advises Chase to call Diane Miller (Carolyn Hennesy) about Shiloh’s arrest and see if the judge will release Willow Tait (Katelyn MacMullen).

Lulu also tells Laura about the story she is working on for the Invader. Valentin meets with Nina Reeves (Cynthia Watros) that Curtis is working for him and that Jax has a file on both himself and Cassandra Pierce (Jessica Tuck). Jax interrupts after demanding Hayden be honest with Finn about their relationship. Jax informs Nina that Hayden is her new CFO.

General Hospital’s Sonny Corinthos (Maurice Benard) wants Dev (Ashton Arbab) to go to school; Dev doesn’t want to, he would rather work for Sonny. Sonny warns Dev that Jax will be asking questions since he is living in the house with Jocelyn Jacks (Eden McCoy). Lulu approaches Sonny about help with Dante. Sonny sends Dev to the Metrocourt for Carly Corinthos (Laura Wright) to give him a job, Jason catching him trying to rob Laura’s purse.

Michael wants Willow to inform Harmony not to believe anything Nelle says. Michael tells Willow about the DNA test; she believes she has spent her time in jail for nothing. Michael reassures Willow and heads to the hospital to see what is going on with the case.

Chase goes to lock-up and tells Willow the judge just ordered her release. Shiloh is placed in Willow’s cell, and he taunts Willow about the baby. Meanwhile, Michael Corinthos goes to the hospital and urges Lucas to throw the results away. Lucas finally rips them up and throws them in the garbage.