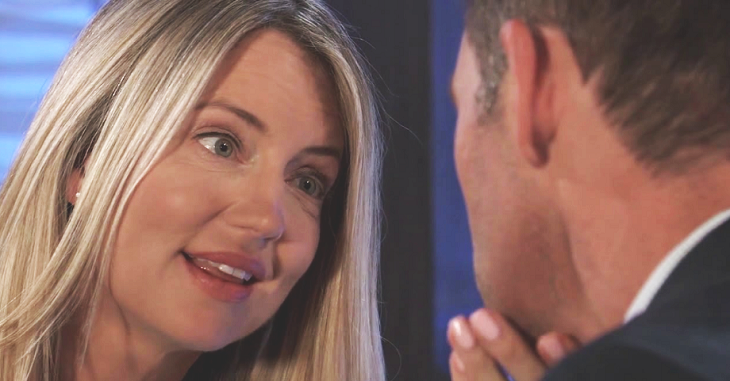 Valentin obviously feels threatened by Jax spending lots and lots of time around Nina, even though he appears to be involved with a newly-returned Hayden Barnes (Rebecca Budig). He may come into Crimson and witness something physical. Although it would be platonic at least on Nina’s part.

Maybe he’ll see her hand on Jax’s shoulder or Jax patting her shoulder for a job well done. Which of course, in today’s culture could lead to a sexual harassment lawsuit for Jax if Nina were to testify and Valentin were to start it.

Valentin has been checking out Jax with the help of Curtis Ashford (Donnell Turner). And if he checks out Jax’s romantic history as well as for anything shady, he will find a pattern of Jax stealing his rivals’ women.

It usually starts with employing them in a business or partnering with them in a business, going all the way back to where Sonny Corinthos (Maurice Benard) and Jax’s rivalry started; with Brenda Barrett (Vanessa Marcil), and that’s a lot of years!

If Valentin knows about that history, then of course he’s going to be worried about Jax stealing Nina out from under him, and finding out from Curtis that Jax has been investigating him plus has a file on Cassandra Pierce (Jessica Tuck) doesn’t help!

For all he knows, Jax could hire Cassandra to make trouble for Valentin and take him down, and Cassandra might have even more secrets she could tell about Valentin that could ruin him in more ways than Liesl Obrecht (Kathleen Gati) does.

The secret causing the most fear for Valentin of course, is that Sasha Gilmore (Sofia Mattsson) isn’t really Nina’s long-lost daughter. Although if a true DNA were to be taken it could still show relation, just not mother and daughter.

General Hospital fans have long thought that Sasha could either be a child that Liesl gave away or possibly even a result of a teenage romance of Liesl’s daughter Britt Westbourne (Kelly Thibaud) because of the strong family resemblance!