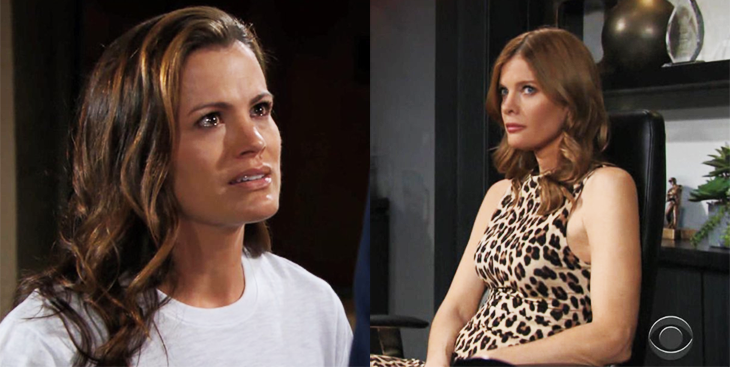 The Young and the Restless spoilers indicate that Phyllis Summers (Michelle Stafford) will get payback on Chelsea Lawson (Melissa Claire Egan) by framing her for murder.

Chelsea’s return to Genoa City hasn’t been too welcoming. Upon arriving back in town, she met with her ex-husband Adam Newman (Mark Grossman), who wants to reunite with her. But their plans for a reunion were thwarted by Chelsea’s husband Calvin Boudreau (John Burke).

Chelsea married Calvin while she was on the run, and as she stated Calvin became a father to her son Connor Newman (Gunner and Ryder Gadbois). Adam wants to see his son, but Chelsea is determined to keep him out of Connor’s life.

But now all that may change because of Calvin’s death and the police investigation.

Paul Williams (Doug Davidson) received the autopsy results, which shows that Calvin’s death may be a homicide. Suspicion is going to fall on Chelsea because she’s Calvin’s wife, but is she innocent or is someone framing her?

With Calvin’s death being a homicide, it’s believed that someone is framing Chelsea for murder. Everyone believes that Adam is the one behind the setup, but the swerve is that it’s Phyllis who is framing Chelsea.

Phyllis and Adam have recently become business partners at Dark Horse, but they also seem to be on friendly terms too. Adam had confided in Phyllis his feelings about Chelsea, and Phyllis had advised Adam to let Chelsea go.

Young And The Restless Spoilers – Is She Still Angry With Chelsea Newman?

But it looks like Phyllis is taking matters into her own hands.

Phyllis doesn’t like Chelsea and wants her out of Genoa City, and she’ll do anything to make that happen. Yet, what is the reason behind Phyllis’ motivation?

Could it be that she’s still angry at Chelsea for embezzling money from Fenmore’s? Or could it be that her ex Nick Newman (Joshua Morrow) is still pining over Chelsea and defending the ex-con for her actions? Or is the reason because Phyllis is in love with Adam and views Chelsea as competition?

Whatever the reason, Phyllis is out to destroy Chelsea and framing Miss Lawson for a crime she didn’t commit would be the ultimate revenge.