Big Brother 21 Spoilers: Argument Between Bella And Kemi Gets Physical – Fans In An Uproar 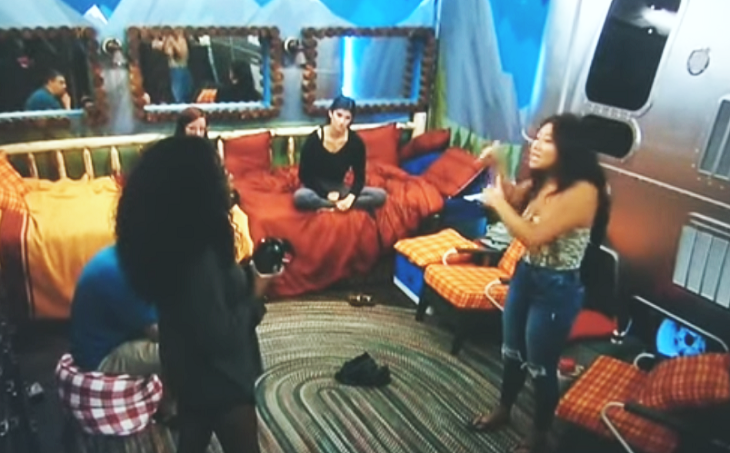 Big Brother 21 spoilers reveal after the live eviction when Kemi was sent to Camp Comeback, the drama continued inside the house. There was actually a fight between Bella and Kemi that got physical!

Bella put her hand on Kemi’s arm, and Kemi told her not to touch her and pushed Bella away. Fans watching the live feeds were in an uproar and want Bella thrown out. The reason for the fight was that Bella and Nick were not thrilled about Kemi’s pre-eviction speech.

Big Brother Kemi wanted to oust Nick and Bella for playing both sides of the house, but in the end, Nick won HOH and now he and Bella have all the power this week, which most likely solidified his alliance with Gr8ful.

Funny enough, if Nick had not won the Big Brother 21 HOH this week, he and Bella would have been the targets because Gr8ful are not buying their fake loyalty. But winning HOH has a way of changing the way the house thinks as a whole. Nobody wants to be the target this week, so you know they are all going to be sucking up to Nick and Bella.

This was not the most dramatic fight ever aired on Big Brother. We’ve seen house guests expelled, but it has been for more than just touching someone’s arm. Does this seem like a threat of violence? I doubt Bella will be kicked out for it.

Most likely production will just give the house guests a warning and be done with it. Still, Bella did touch Kemi in a heated argument; she should have kept her hands to herself, it’s still not right.

These house guests really forget that this is just a game, it’s not real life – they need to wake up and starting focusing on the half million dollars that could be theirs if they would just play the game. They need to stop fighting and stop having sex!

Bella is now trying to defend herself, obviously afraid that she might get kicked out of the game. She now says that Kemi was standing too close to her and baiting her.

Then she went in the diary room and asked for a clear description of baiting. She went on to say that she was the one harassed but she was told to walk away next time.

What do you think about this fight? Was it enough to warrant Bella being evicted from the BB house?