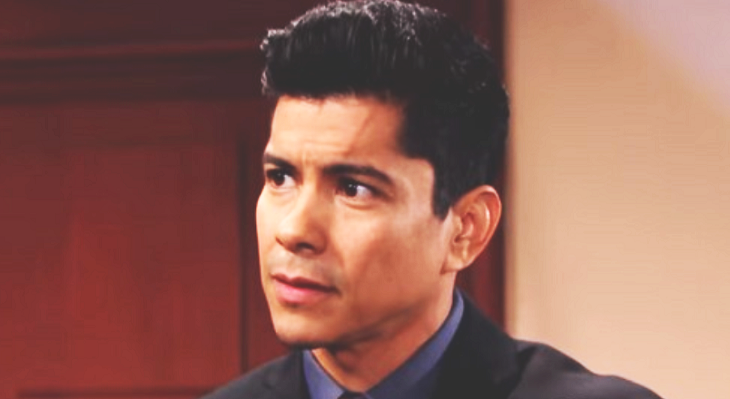 Detective Alex Sanchez will once again be seen on the Bold and The Beautiful as his portrayer, Jeremy Ray Valdez, reprises his role on the soap. Last seen in November 2018, Valdez was spotted taping his scenes on July 10.

He also posted a photo on Instagram with Annika Noelle, who plays Hope Logan, and Thorsten Kaye, who plays Ridge Forrester.

“Love that I got to spend my birthday chopping it up with the coolest cast and crew on the planet!” There’s no word yet as to his first air-date, so fans will have to stay tuned for further announcements.

Love that I got to spend my birthday chopping it up with the coolest cast and crew on the planet! @boldandbeautifulcbs . @iamthorstenkaye and @annikanoelle are THE GOODS! . . . . . #boldandthebeautiful #boldandbeautiful #cbsdaytime #actor #detectivesanchez

Bold And The Beautiful Spoilers – Is The Detective On To Thomas Forrester?

What could be the comeback storyline for Detective Alex Sanchez? Viewers know that Hope is set to marry Thomas Forrester (Matthew Atkinson), who was involved in the death of Emma Barber (Nia Sioux).

Could the detective be on to him? The scenes on B&B are getting more intense lately, as Xander Avant (Adain Bradley) is determined to find evidence proving that Thomas had something to do with Emma’s untimely passing.

Will Thomas claim another life just so he could protect his secret? Or will Detective Sanchez catch him before he kills someone else?

Whatever storyline he’s part of, fans will surely love to see the Detective back. If he is looking into the death of Emma Barber, it’s expected he’ll have to do a lot of digging. With Thomas being a master manipulator, schemer, and killer, the detective will find himself up against a formidable opponent.

Before joining the cast of the Bold and the Beautiful back in March 2018, Valdez had stints on national commercials for big brands like Toys R Us, Coca-Cola, Six Flags, and Verizon. He continued to hone his acting skills until landed his first TV role on “The Brothers Garcia.” He then appeared on other TV shows like “ER,” “Veronica Mars, “Drake & Josh,” “Medical Investigation,” “Boston Public,” and “One on One.”

Bold and the Beautiful Spoilers: Logan Sisters Try To Talk Hope Out Of Marrying Thomas – Will She Listen?

He landed a role in an independent film titled “La Mission,” which was released in 2010. His impeccable performance in the movie helped him earn several accolades including a 2010 IMAGEN Award for “Best Supporting Actor.” His other film credits include “The Obama Effect,” “All Signs of Death,” and “Benavides Born.”