Bold and the Beautiful Spoilers: Logan Sisters Try To Talk Hope Out Of Marrying Thomas – Will She Listen? 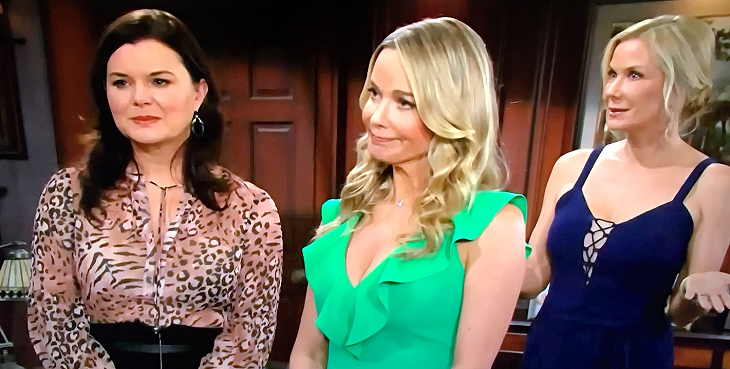 Hope Logan (Annika Noelle), who recently took her birth name back, remains ruled by emotions on ‘The Bold and the Beautiful’. That’s understandable, considering all that’s happened and the truth that’s being withheld from her by a group of people who are not putting her best interests first.

In full contrast her mother, Brooke Forrester (Katherine Kelly Lang), and aunts Katie Logan (Heather Tom) and Donna Logan (Jennifer Gareis), are trying to use logic in response to the stunning news that Hope is now engaged to Thomas Forrester (Matthew Atkinson). Well, their efforts aren’t making an impact.

Liam Spencer (Scott Clifton), easily the most influential person in Hope’s life, couldn’t get through to her. His plea to reject Thomas have been rejected out of hand. Liam is actually the reason why she impulsed into agreeing to Thomas’ orchestrated proposal.

Bold And The Beautiful Spoilers – Thomas Forrester Is Taking Advantage

Hope suspects that Douglas Forrester (Henry Joseph Samiri) didn’t think of proposing to her for his dad. But she didn’t push the issue after asking Thomas a question about that scenario. In effect, her decision to push Liam to Steffy Forrester (Jacqueline MacInnes Wood) and the girls created the opening for Thomas to rush in.

As Brooke pointed out, Thomas is taking advantage of Hope’s vulnerability. He’s exploiting her grief and that of his son, who lost his mother, Caroline Spencer (Linsey Godfrey). But Hope feels that Thomas is just looking out for his son and does sincerely care about her.

Hope’s miss of Thomas’ intentions places her in increasing danger, though she refuses to see the point that her mother continues to make, or the issue Katie raised. By not referencing Thomas when discussing the engagement, Hope proved that she’s not acting out of love.

Bold And The Beautiful Spoilers – Can Anyone Talk Hope Logan Out Of This?

Thomas feels that he’s fighting time. That’s why Atkinson’s well-played, calculating character is pushing hard to not just marry Hope, but also to start a family of their own as soon as possible.

Bold And The Beautiful Spoilers: Marriage In Trouble – Ridge Confronts Brooke Over Her Negativity Towards Thomas https://t.co/8anOm04kyF

Brooke’s accurate belief about Thomas’ unstable personality will eventually result in Hope facing bad consequences if she stays with him. Whether any of the Logan sisters, Liam, someone else, or Hope herself can prevent the seemingly inevitable is why B&B fans are watching this arc play on.