Days Of Our Lives Spoilers: FakeNicole Tries To Seduce Brady 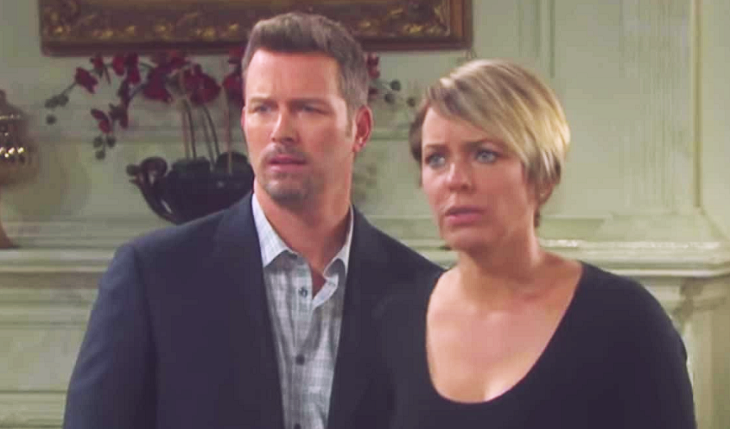 Days of Our Lives spoilers tease that even though in Thursday, July 12th’s episode, Kristen DiMera (Stacy Haiduk) pitched a temper tantrum in her room at the Salem Inn.

She swore to herself no more Nicole Walker (Arianne Zucker) mask and wig. Then she went to the DiMera mansion to kill Kate DiMera (Lauren Koslow) and Ted Laurent (Gilles Marini) in the secret room as herself.

But there will be at least one more time that Days of Our Lives viewers will see fake Nicole, and that will be when she tries to seduce Brady Black (Eric Martsolf).

Days of Our Lives promo stills in Soap Opera Digest show Kristen as Nicole, in a tight black dress, kissing Brady so forcefully he looks like he’s about to tip over backwards!

It looks like she sneaks up on him in a bedroom, quite possibly his own bedroom in the DiMera mansion, as a bed can be seen in the background behind the two. Brady is mystified as to how “Nicole”, who had moved on past him to Eric Brady (Greg Vaughan) can reject Eric and heads straight for him!

Brady tries to resist “Nicole’s” advances, notes Martsolf in a “Hot Plot Preview” article in Soap Opera Digest. But Brady, having been between girlfriends for a long time now, is starting to get very tempted to give in to her!

“Nicole” is acting like she won’t take no for an answer, and he continues to tell her that he will not let a woman, even if it’s her, get in between him and a brother again, Eric in particular!

By the end of the week of July 15, other Days of Our Lives spoilers tease that Kristen will grow even more desperate and change her tactics – and her costume – and come on to Brady again, but Brady continues to reject her – he is just not that desperate!