Days Of Our Lives Spoilers: JJ And Haley Move Into The Loft With Tripp – Awkward! 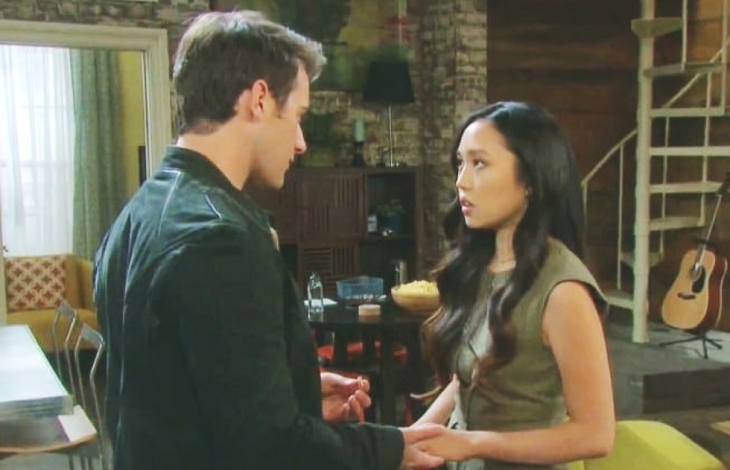 Days of Our Lives spoilers tease that JJ Deveraux (Casey Moss) and Haley Chen (Thia Megia) will move into the loft with Tripp Dalton (Lucas Adams) on the July 12 episode. Tripp reconnected with Haley, who had come over intending to get her things on Tuesday’s Days Of Our Lives episode,

He came out of the shower preparing to defend himself against a burglar! Haley had forgotten her key and climbed in through a window, probably up a fire escape. The two caught up, and it was revealed that their green card marriage had been annulled before Haley hooked up with JJ.

She explained to Tripp how her mother had called in a favor from a senator she knew and they didn’t have to go to China after all, and that Haley is in the country legally while she works on her green card application.

The two had discussed that staying in the loft with Tripp may be a little awkward in a way but apparently that is exactly what happens on Friday.

Perhaps Tripp needs the money to keep staying there himself since Ciara Brady (Victoria Konefal) has moved in the DiMera gatehouse with Ben Weston (Robert Scott Wilson).

Claire Brady (Olivia Rose Keegan) will be in Bayview for quite a while, and he won’t take her back anyway, as a roommate or anything else.

Days Of Our Lives Spoilers – Will Haley Chen Be Re-Hired At The Hospital?

He’s OK with Ben but still wouldn’t trust him enough to take him in as a roommate along with Ciara, if they were to want to move in. A barista probably doesn’t make a lot of bucks in Salem, they don’t anywhere else, at least not in real life.

Haley herself has not quite gotten back to work either, although Tripp didn’t think she would have any problems being rehired at Salem University Hospital and likely put a good word in to his aunt Kayla Johnson (Mary Beth Evans).

Days Of Our Lives Spoilers: Maggie Horton Needs Help – Can Sarah Save Her? https://t.co/Tps3ZK7g0N pic.twitter.com/fKKprdrpJK

Days of Our Lives episodes haven’t mentioned how JJ’s status as an EMT is, although if nothing else, he and Haley could probably move in with his mother Jennifer Horton (Melissa Reeves) if money is an issue. However, that would be much more awkward than moving in with Tripp.