Young And The Restless Spoilers: Sharon And Chelsea Come To A Truce – Old Rivalry Over? 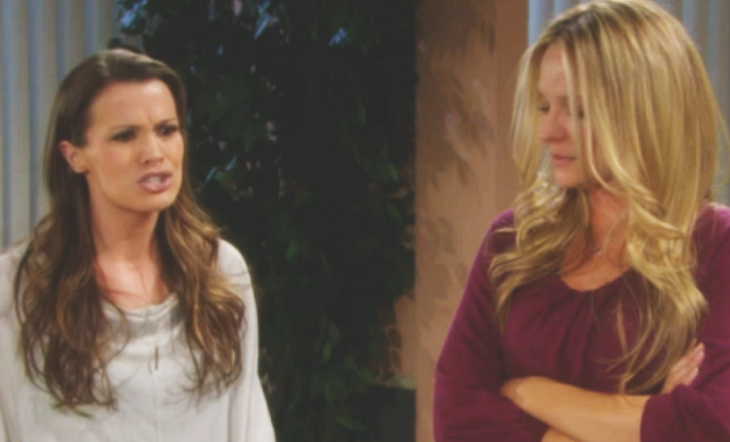 The Young and the Restless (Y&R) spoilers tease that Chelsea Newman (Melissa Claire Egan) and Sharon Newman (Sharon Case) will rehash their turbulent past and come to an understanding. Can the women put everything that’s happened behind them and agree to be friendly with each other?

The pair have certainly had their differences with each other. When Chelsea was married to Adam Newman (then played by Michael Muhney), Sharon depended on him for emotional support.

Adam had been her rock and was there for her when no one else was. At one troubled point in her life, Sharon went to a very dark place and she set the Newman ranch on fire. Adam was the only one who helped her.

Young And The Restless Spoilers – Chelsea Newman Put Her Foot Down

It became a problem in his marriage to Chelsea and she put her foot down. Y&R spoilers say that Adam decided to turn his back on his friendship with Sharon for the sake of his family. And it was something that was difficult for both women.

Sharon always felt like he abandoned her, and Chelsea always felt jealous of his connection to the blonde bombshell. Adam (Mark Grossman) thought he could be there for both of them, but it didn’t work out that way.

Now that Chelsea has returned to Genoa City, Sharon wants to iron out their differences. She probably wants to talk about Chelsea’s sudden move in 2017. It probably has something to do with Christian’s paternity secret and how she left Nick Newman (Joshua Morrow) heartbroken.

Young And The Restless Spoilers – Sharon Newman Willing To Start Over

Chelsea and Sharon have something in common – they both loved two Newman brothers. Then there was Dylan McAvoy (Steve Burton). They both cherished their time with him too. They seem to have a habit of sharing men.

The Young and the Restless spoilers suggest that Sharon is willing to let things go and start over with Chelsea. However, Chelsea may not trust Sharon after she learns that she’s been spending a lot of time with Adam.

The Young and the Restless spoilers: Adam Accuses Chelsea Of Murder – Calvin’s Cause Of Death Revealed –Victor’s Confusion Gets Worse https://t.co/AEUAx3wVwV pic.twitter.com/XAg77FXc7n

For whatever reason, Chelsea doesn’t completely trust Adam and she seems to be gravitating toward Nick instead. We all know that she will eventually be back in Adam’s orbit and Nick will get his heart shattered all over again.

Do you think Sharon and Chelsea will be able to call a truce?