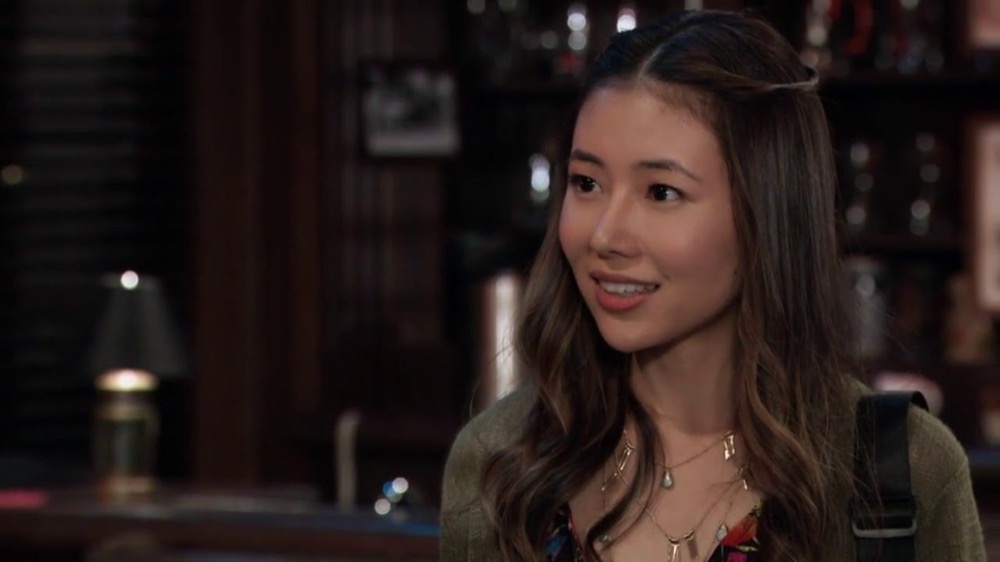 General Hospital spoilers tease that Kelsey Wang, who plays Daisy Kwan, a Dawn of Day member who took the fall for emails sent to Sam McCall (Kelly Monaco) from Shiloh Archer (Coby Ryan McLaughlin) will reprise her role the week of July 15th.

General Hospital spoilers will recall that Daisy is the first Dawn of Day member to appear in Port Charles last summer, handing out flyers to a festival at Charlie’s Pub. This is where she befriended Kristina Corinthos-Davis (Lexi Ainsworth) Julian Jerome’s (William DeVry) newly hired bartender, Kristina just having returned to Port Charles in August, 2018 after her relationship with her former college professor Parker Forsyth (Ashley Jones) broke up and she returned from out of state, where she had moved with Parker.

Daisy had also been seen working in Turning Woods, an Alzheimers care facility where Mike Corbin (Max Gail) went in a daycare basis, later to be moved there fulltime from the Corinthos home, when his Alzheimers began to progress and the Corinthos family could no longer provide adequate care and supervision for him.

Daisy had been disciplined by Shiloh (of course now General Hospital viewers know she took the fall for him) and later returned. Daisy had recruited Kristina into Dawn of Day but then when she was disciplined and booted out of Shiloh’s “inner circle” – meaning his harem – Shiloh gave Daisy’s responsibilities to Kristina of being Dawn of Day ambassador and recruiter. She was last seen in the General Hospital episode of April 16th.

In Thursday, July 11th’s episode Harmony Miller (Inga Cadranel) came to the Port Charles Police Department with her legal defender after Jason Morgan (Steve Burton) had helped her see the light about Shiloh, and she agreed to testify against him and told all to Sam as well, telling her that Shiloh had been stalking her for years to get back at her for duping his late father Henry Archer and stealing what Shiloh considered to be his inheritance (although it had been revealed Shiloh was actually cut out of his will).

She also reveals that it was Shiloh, not Daisy, who had sent the snail mail and the emails to Sam as voices from the past, the snail mail being an obituary for one of Sam’s other past marks, and the emails being sent from the name she used when she was married to Henry Archer. It is possible Daisy will appear to further corroborate what Harmony told Sam.