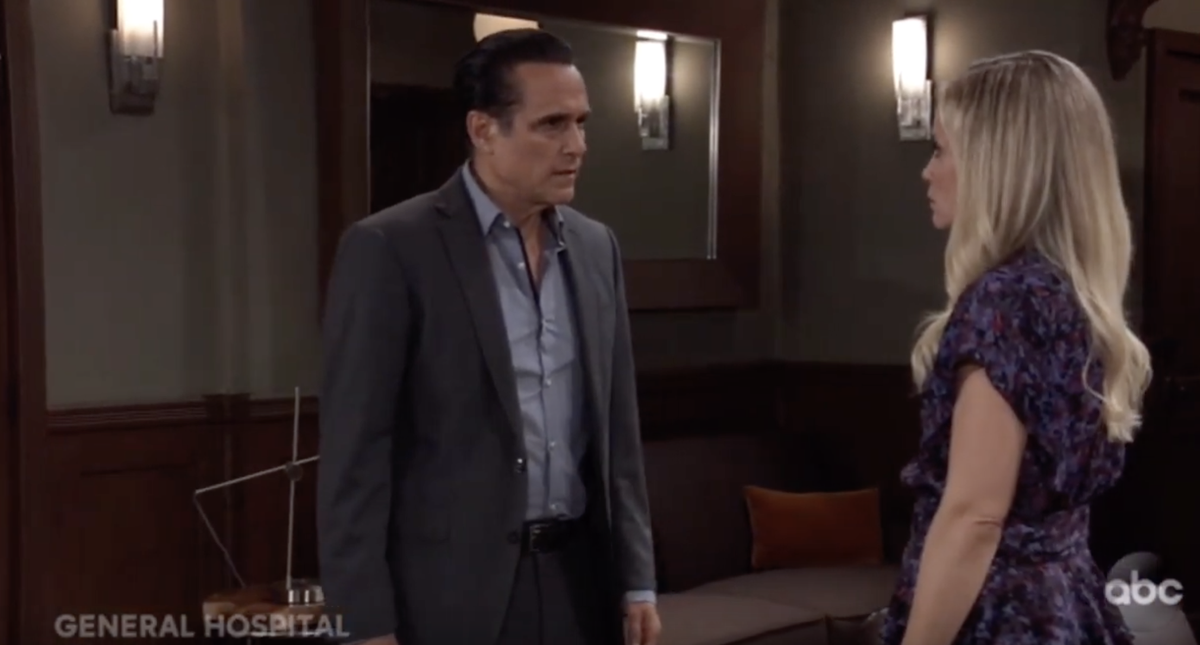 General Hospital spoilers for the week of Monday, July 15th through Friday, July 19th promise another exciting week of drama for General Hospital viewers as new mysteries materialize and others begin to be solved!

On Monday, Lulu Falconeri (Emme Rylan) goes to her father in law Sonny Corinthos (Maurice Benard) for help in bringing her husband, Dante Falconeri (Dominic Zamprogna) home to Port Charles. A General Hospital promo shows Lulu breaking down as she tells Sonny that Dante is missing everything in their family’s life and that she just can’t take life without Dante anymore! She pleads with him to find Dante and bring him back home again as he did from Turkey a few months ago.

On Tuesday, Lulu is furious! This is likely to be about her bestie Maxie Jones (Kirsten Storms) having taken upon herself to go confront Lulu’s husband Dante in the WSB facility in Ithaca, New York in Friday’s episode, causing a possibly fatal outcome as a shot rang out when Maxie ran into the visitation room like a bull in a china shop! Jasper Jacks (Ingo Rademacher) is warned about an alliance; his new employee and co-conspirator Hayden Barnes (Rebecca Budig) likely become aware of Nina Reeves (Cynthia Watros) and Curtis Ashford (Donnell Turner) being in cahoots! Also on Tuesday, Kim Nero (Tamara Braun) and Julian have a heart-to-heart talk, Curtis checks in with Drew Cain (Billy Miller) and Ava goes to a meeting at General Hospital.

Sam McCall Has a Surprise For Jason Morgan

On Thursday, Sam McCall (Kelly Monaco) has a surprise for her significant other, Jason Morgan; and Valentin Cassadine (James Patrick Stuart) meets with Curtis, probably for an update on their investigation into Jax. Also on Thursday, Sasha Gilmore (Sofia Mattsson) makes a declaration, Nina tries to apologize, and Curtis opens up about his fears.

On Friday, Jason and Drew honor their promise to Oscar Nero Quartermaine (Garren Lake Stitt) and start building a treehouse for the younger ones to play in, while Detective Harrison Chase (Josh Swickard) delivers some bad news. Also on Friday, Shiloh grows desperate, Kristina is shaken, Laura offers her support, and Jordan Ashford (Briana Nicole Henry) is also shaken! Could all this be related to Chase’s bad news?