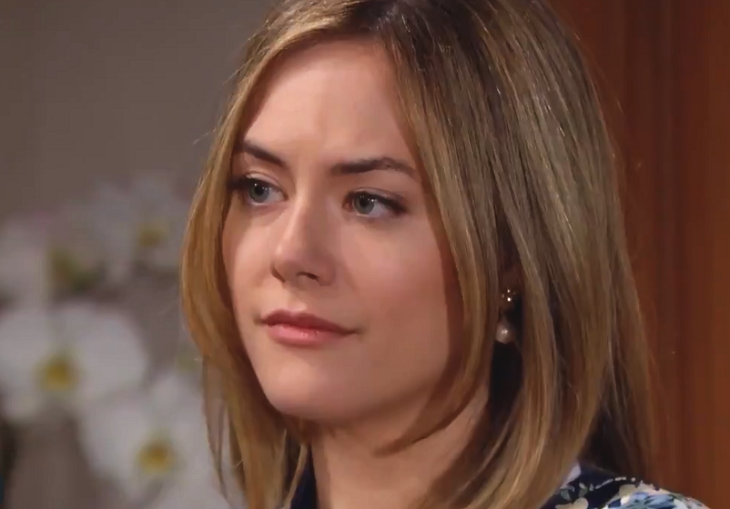 The Bold and the Beautiful spoilers for Tuesday, July 16, tease that some of the key people in Hope Logan’s (Annika Noelle) life are going to get a real shocker. As B&B viewers know, Brooke Forrester (Katherine Kelly Lang) and Liam Spencer (Scott Clifton) were surprised beyond belief at Hope’s sudden engagement to Thomas Forrester (Matthew Atkinson). They both know that Thomas has manipulated Hope’s feelings through his son Douglas Forrester (Henry Joseph Samiri) and they can’t stand it.

But both Brooke and Liam are holding out hope that Hope will realize over time that she’s made a terrible mistake by agreeing to marry Thomas. The way they see it, just because Hope and Thomas are engaged doesn’t mean that they have to get married, and surely Brooke and Liam will try to talk some sense into Hope during what they anticipate will be a very long engagement.

But on Tuesday’s episode of B&B, Hope will drop a bomb on everyone. She and Thomas will let it be known that they plan to be married as soon as they can get the arrangements pulled together. As B&B viewers know, Thomas tricked Hope into deciding that their wedding needed to happen asap, by scaring Douglas and making him need Hope more than ever before. So Hope will likely proclaim to everyone that the idea for a quick wedding is all her idea.

And that’s going to really upset mama Brooke. She’ll likely do everything that she can to talk Hope out of the idea of marrying Thomas right away. But it looks like Hope will be determined to carry on with “her” plan for a fast wedding, all for the sake of Douglas.

The Bold and the Beautiful spoilers also indicate that Liam will find out about the rushed wedding on Tuesday’s episode as well. Perhaps Hope will tell him herself, or he might just hear the news through Steffy Forrester (Jacqueline MacInnes Wood). The news will surely send Liam into a panic, as he absolutely doesn’t want this for his ex-wife.

Meanwhile, on Tuesday’s new episode of B&B, Hope and Thomas will start planning their upcoming wedding. Of course, they’ll need help and support from both the mother of the bride and father of the groom, so Brooke and Ridge Forrester (Thorsten Kaye) will likely get involved in the planning. And that’s probably going to lead to some tense moments, since not everyone is happily on board with the wedding.

First off, there will be Hope, who has clearly been wrestling with her feelings about marrying Thomas. Her true love is Liam, and she’s been flashing back to happier times with him quite a bit lately. But as she pushes forward with wedding plans, she’ll have to put her true feelings on the back burner.

And then there will be Brooke, who won’t be thrilled about working with Hope and Thomas to iron out the arrangements. Someone will have to get flowers, food, and all the logistics nailed down, and Carter Walton (Lawrence Saint-Victor) will have to be approached about performing yet another wedding ceremony at the estate. It will be quite the whirlwind!

Meanwhile, Thomas and Ridge will probably be as happy as they can be to plan and arrange the nuptials. Ridge is blissfully ignorant of his son’s true manipulative nature, and he truly believes that Hope and Thomas are meant to be, just as Steffy and Liam are meant to be. Ridge might notice that Brooke isn’t happy about all the planning, and this could cause tension between them.

The Bold and the Beautiful Spoilers: Will Hope Really Marry Thomas? https://t.co/uwzkpqb95y pic.twitter.com/7O7VvyQCfj

At any rate, it’s going to be an interesting time as everyone does their best to get ready for a wedding by week’s end. Emotions will be running high, but it looks like everything soon come together! Be sure to tune in on Tuesday to catch up on everything happening on B&B right now. In the meantime, keep up with Hollywood Hiccups for all the latest news and updates on all of your favorite daytime television shows right here.