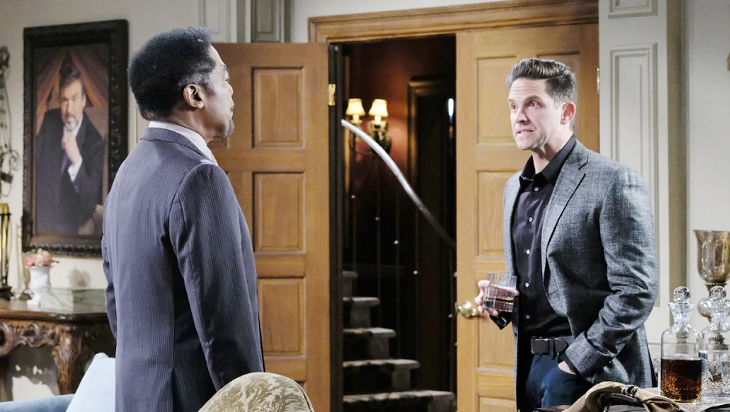 Brady goes to visit Nicole and finds Eric Brady (Greg Vaughan). Gabi has told Brady about Nicole’s outburst at Doug’s Place, and he is concerned. Nicole won’t talk to Brady and Eric now; she has a work issue. Nicole brings her daughter up yet again. Brady pushes Nicole to talk to him, she agrees but wants Eric to leave.

Nicole plays the victim with Brady and admits to attacking Stefan Dimera (Brandon Barash). Brady is worried about Nicole; he thinks she went to work too early. Brady talks to Nicole about resigning from Dimera. Nicole says Stefan is the problem, not her. Brady asks Nicole to come to work for him. Nicole can’t work with Brady if they can’t be together, Brady refuses. Nicole tries to seduce Brady.

Days of Our Lives Rex gets to the hospital, and Kate explains that Stefan wanted revenge against her. Hope said she saw the necklace but wasn’t sure if Ted had given up on her or not. Hope shows Ted the text that came from his phone; he would never give up on her; he assures her. Kate meanwhile, wants to go home, Rex refuses. In the other room, Ted tells Hope he wants to be with her, Hope needs to wait.

Days of Our Lives Xander Cook (Paul Telfer) demands to know why Kristen Dimera (Stacy Haiduk) kept Kate and Ted alive. Kristen tells Xander that Kate and Ted promised to say whatever she wanted if she let them live. Kristen threatened Hope and Kate’s kids if they double cross her. Hope gets Ted and Kate to the hospital, and they wait to make a statement to the police about Stefan. Kristen tells Xander that Hope rescued Ted and Kate. She lets Xander know he isn’t off the hook. Kristen tries to tell Xander that she has a plan, but he takes off. Xander is taken to the PCPD and offers to sign for immunity.

Days Or Our Lives Spoilers – Stefan DiMera Is Stunned By Accusations

Days of Our Lives Stefan is shocked to find out he is being accused of kidnapping Ted and Kate. Stefan tells Hope that accusation is absurd. Stefan throws them all out of his house. Hope plans to call the cops on the way to the hospital. Stefan goes to the secret room and observes the mess left behind. Stefan sees the empty champagne bottles and gets a puzzled look on his face. Gabi realizes that Stefan has fallen for her, but she has to stick to the plan.

Xander questions her about talking to herself. Lani arrives and arrests Xander. Abe is talking to Stefan when Eli shows up to arrest him. Gabi leaves when she finds out about Stefan’s arrest. Stefan tells Eli that Kate and Ted are lying. Eli tells them there is a co-conspirator, Xander.

Gabi asks Eli for time with Stefan, he agrees. Stefan tells Gabi he is being framed by Ted and Kate and whoever locked them up. Stefan tells Gabi about the bottle of champagne in the room, Gabi reminds him of Nicole’s trip downstairs. Stefan wonders if Gabi believes Nicole is behind this.