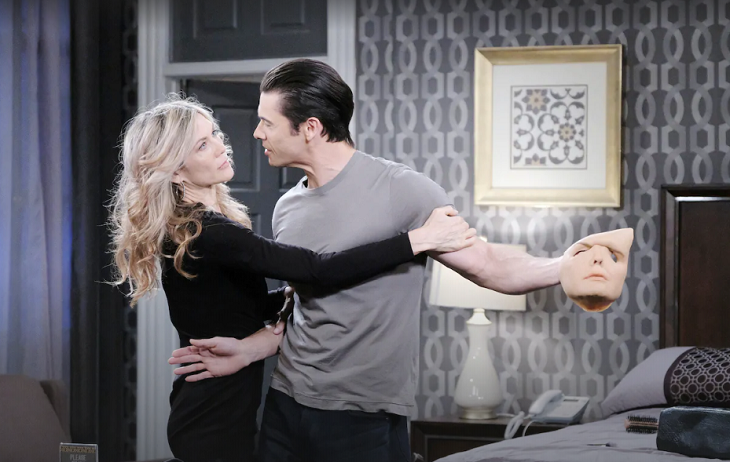 Days of Our Lives spoilers tease another exciting day of drama among the Salemites with tense situations and unexpected outcomes. Days of Our Lives viewers, be prepared for some doozies on the Tuesday, July 16 episode!

Eric Brady (Greg Vaughan) contemplates a big change. It would seem three’s a crowd in his apartment with him, Rex Brady (Kyle Lowder) and Sarah Horton Brady (Linsey Godfrey) all living there. Besides, he and Sarah are still trying to fight off secret feelings for each other. Something’s got to give, or someone has to go, but who? Would Eric really move out or possibly even leave Salem to get away from his pain?

Xander Cook (Paul Telfer) gets revenge on Kristen DiMera (Stacy Haiduk) in an unusual way. He will steal her Nicole Walker (Arianne Zucker) mask, thinking this will force Kristen to stay in her room like a good little girl. He will give her a Mexican wrestling mask in its place. But Kristen knows there’s more than one way to skin a cat, although she’d probably rather skin Xander. As Days of Our Lives viewers know, it was actually Kate DiMera (Lauren Koslow) who implicated Xander, and it led to his arrest. Xander probably figures Kristen flipped on him and called the police in her Nicole voice.

A newly freed Ted Laurent (Gilles Marini) does his best to throw Hope Brady (Kristian Alfonso) off track as she continues to sort out the truth of the circumstances surrounding his and Kate Roberts DiMera’s (Lauren Koslow) captivity. As Days of Our Lives viewers know, Kristen had made a deal to spare their lives if they pinned their kidnapping on Stefan DiMera (Brandon Barash).

On Monday’s episode, Ted continued to blame Stefan and Kate did also, even telling Stefan to his face he’d never get away with this, as Eli Grant (Lamon Archey) led him out of the DiMera mansion in cuffs.

Meanwhile, in another room in the hospital Kate told her son Rex Brady (Kyle Lowder) the same thing. While Hope doesn’t put it past Stefan to do something like this, perhaps she recalls hearing Ted’s phone ring in Nicole’s room and has her doubts about Stefan being behind the kidnappings?

Gabi Hernandez (Camila Banus) strongly suspects that “Nicole” is behind Stefan’s troubles, Stefan having been arrested for Ted and Kate’s kidnapping because they fingered him as the one responsible for their kidnapping and captivity in the secret room in the DiMera mansion.

Hope was the one who called Eli directly, wanting to bypass inept Police Commissioner Eve Deveraux (Kassie DePaiva) who may not have allowed Eli to investigate or make the arrest. Stefan probably shouldn’t have checked out the secret room himself in Monday’s episode and left his fingerprints, but since he lives there, it would be difficult to use as evidence against him. Gabi had already started putting things together as she talked to Stefan briefly at the police station.