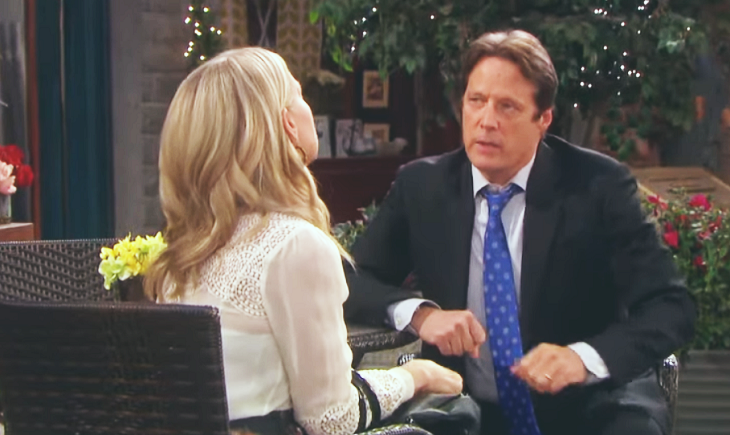 The Days of Our Lives weekly preview features Jack Deveraux (Matthew Ashford) and Jennifer Horton (Melissa Reeves), and there is one scene showing a young Jenn and Jack in a passionate kiss.

1. Jack Deveraux Wants His Memory Back

Jack has decided he wants to remember his past after all, and tells his current wife Eve Deveraux (Kassie DePaiva) with an apology.

He also decides to take the amnesia serum, although it’s not clear how he will get any of it. In the preview, Jack and Jenn sit at a table apparently meeting for a meal and he wants to know if she’s always been such a pest!

She will make an impassioned speech to him about the man he used to be, but later in the week will decide it’s time to move on from him. It sounds like a rocky road ahead for Jack and Jenn just like in the old days.

Kristen DiMera (Stacy Haiduk), posing as Nicole Walker (Adrienne Zucker) puts the moves on Brady Black (Eric Martsolf) and seems determined to not take no for an answer. She practically tries to force herself on him, and it’s all he can do to push her off of him!

She has to change her tactics and her disguise when Xander Cook Kiriakis (Paul Telfer) swipes her Nicole mask and gives her a Mexican wrestling mask in its place, thinking he has forced her to stay in her room at the Salem Inn.

Xander continues to play games with Kristen, making it a game of cat and mouse after he again wiggles out of handcuffs and charges after being arrested yet again on Monday. He will also have a showdown with Gabi Hernandez (Camila Banus) later in the week.

Hope brought them up there after rescuing them from the secret room and they had just told her that Stefan was the one who had kidnapped and imprisoned them. What Hope and Stefan don’t know is that Kristen forced Kate and Ted to finger Stefan for the crimes.

Hope and Ted kiss and happen to be spotted by Hope’s daughter Ciara Brady (Victoria Konefal) who is shocked at the sight. Lani Price (Sal Stowers) and Eli Grant (Lamon Archey) surprise Lani’s father, Abe Carver (James Reynolds) with the good news of their engagement. And rumor has it that poor old Eric Brady (Greg Vaughan), still single and unhappily so, contemplates leaving Salem!

Days of Our Lives Weekly Spoilers July 15 to 19: Jack Wants His Memories Back, Decides to Take Serum – Breaks News to Eve