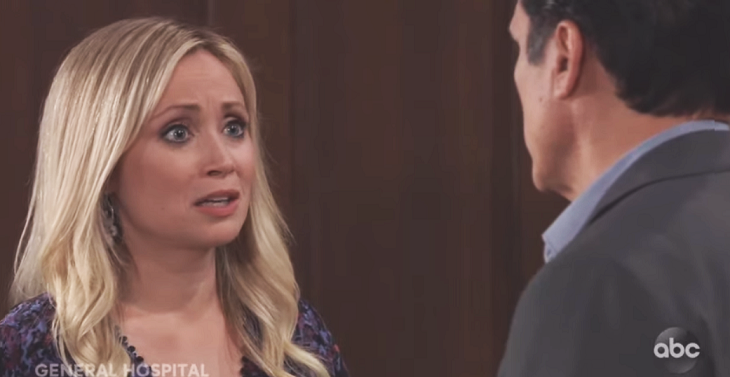 General Hospital spoilers tease that Lulu Falconeri (Emme Rylan) cannot take much more of a life without her husband, Dante Falconeri (Dominic Zamprogna). A new General Hospital promo video for the July 15 episode details her angst and her frustration at Dante missing out on so much in her and their childrens’ lives, not to mention the lives of their extended family and friends.

Lulu goes to talk to her father-in-law, Sonny Corinthos (Maurice Benard) about her loneliness and frustration without Dante. As General Hospital viewers know, Dante has been in a WSB facility for medical and mental care to overcome the post-traumatic stress disorder-like symptoms and post-hypnotic brainwashing suggestions.

These suggestions caused him to be triggered to “complete the mission”, the mission being that of killing Lulu herself! Dante didn’t know if he would ever be back to himself again and whole, and that is why he told her not to wait for him and move on.

In the video, Sonny asks Lulu if she has heard from Dante. She answers with a quiet “no.” Then she continues to tell Sonny that it is getting to the point where his absence is more than she can take. Sonny tells her he knows; and he’s sorry, and asks Lulu if there is anything he can do to help.

Lulu responds, nearly in tears, and tells him he found him before and brought him back, and she needs him to do that again. She looks like she is starting to cry as Sonny asks her if something happened, and what is wrong.

Lulu reminds Sonny he is on the verge of becoming a father again, with he and Carly Corinthos (Laura Wright) expecting a new baby. And Dante is missing all of it. Lulu, getting even more frustrated, increasingly louder and closer to tears, tells Sonny that their lives are just going on, and Dante’s not there.