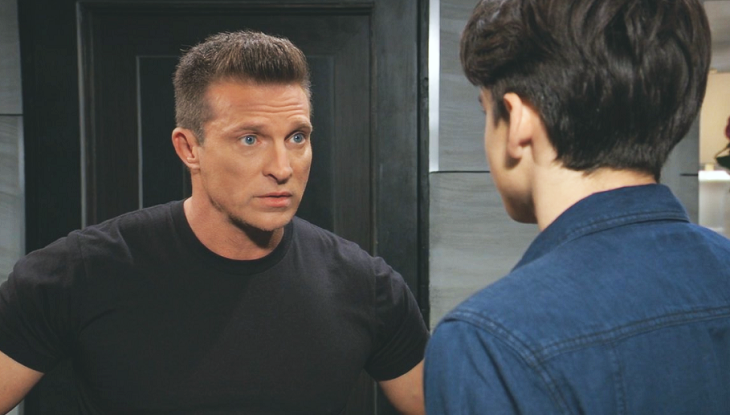 General Hospital (GH) recap for Monday, July 15, reveals Hamilton Finn (Michael Easton) runs into Alexis Davis (Nancy Lee Grahn) who offers to talk to him about Hayden Barnes (Rebecca Budig). Finn talks about how he and Hayden almost made it.

Finn talks about all the things that drew him to Hayden and how they have moved on from each other. Alexis tells Finn about getting kicked out of therapy.

General Hospital’s Ava Jerome (Maura West) is at Charlie’s talking to Julian Jerome (William DeVry) when Sibley Gamble (Veronica Cartwright) calls. Kristina Corinthos-Davis (Lexi Ainsworth) overhears Ava’s conversation and tells her how Sibley helped solve a murder. Julian rushes Kristina off to work and talks to Ava about meeting with a psychic. Ava talks about connecting with Kiki on the Haunted Star, Julian disagrees. Julian tells Ava she needs to let this go so Kiki will be at peace. Alexis arrives and she and Julian spar back and forth before discussing Kim Nero (Tamara Braun) and Ava.

General Hospital’s Laura Webber (Genie Frances) gets a phone call and leaves the table as Dev Cerci (Ashton Arbab) knocks her purse into the floor. Jason Morgan (Steve Burton) grabs the purse before Dev can rob her. Hayden joins Laura who shows her Spencer Cassadine’s (Nicholas Bechtel) latest selfie. Laura tells Hayden that Valentin is the only thing left to upset Spencer, he stole his home. Hayden tells Laura she is working with Jax at Aurora.

General Hospital’ Carly Corinthos (Laura Wright) approaches and asks if Jason is getting along ok with Dev. Carly sends Dev to the kitchen to get instructions for his job. Jason wants to know what Carly thinks about Dev; she wants his opinion too. Carly says Sonny likes to pay his debts. Dev also distracts Jocelyn Jacks (Eden McCoy). Carly is fine with Sonny helping Dev. Jason is afraid that Dev will blow his cover and expose Sonny at the same time. Carly tells Jason she will talk to Sonny.

Dev comes out and tries to lie to Jason. Jason tells Dev he saw everything, Dev questions why Jason didn’t tell Carly. Carly goes to see Sonny about Dev and talk to him about her concerns. Carly tells Sonny she is afraid Dev is going to panic. Jason talks to Dev about his situation. Jason explains who Laura is and tells Dev he has to realize he is drawing attention to himself. He tells Dev he is taking unnecessary risks. Sonny agrees with Carly, but he wants to help Dev. Carly and Sonny agree that Dev reminds them both of him. Jason tells Dev he needs to realize that Sonny is trying to help him out; he needs to make better choices.

General Hospital Spoilers – Maxie Jones Blames Herself For The Shooting

General Hospital’s Lulu Falconeri (Emme Rylan) approaches Sonny Corinthos (Maurice Benard) and wants him to bring Dante Falconeri (Dominic Zamprogna) home. She tells Sonny she saw the physical scars on Dante’s body; she knows he has emotional issues as well. Lulu tells Sonny that Dante admitted to being broken and she is broken without him.

General Hospital’s Maxie West (Kirsten Storms) bursts through the door to speak to Dante. Dante grabs a gun and shots, missing Maxie but hitting Peter August (Wes Ramsey). Agents rush in to check on Dante before setting up transportation to GH for Peter. Maxie and Peter make it to GH, and he is rushed in with the doctor. Finn joins Maxie, and she tells him Peter was shot and it’s her fault.

Maxie says Dante isn’t in his right mind and Peter could have died because of her. She asks Finn what is wrong with her. Finn tries to calm Maxie down and convince her that Peter made his own choice to go with her. Maxie wants Finn to go in with her to visit Peter. Peter tells Maxie he was there because he wanted to be. Peter is glad Maxie wasn’t hurt. Lulu gets to the hospital, and Maxie tells her Dante shot Peter.