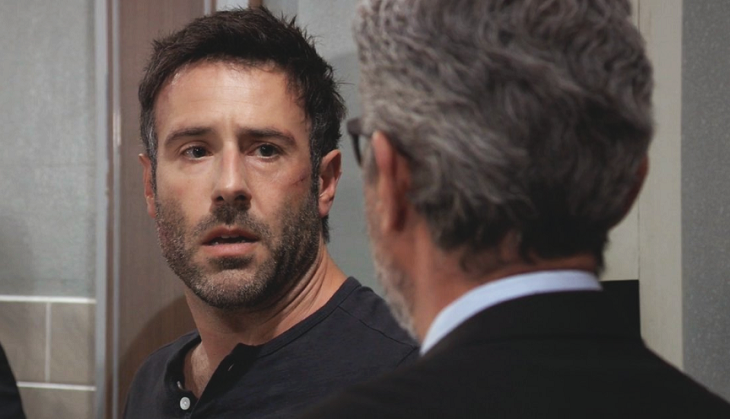 General Hospital spoilers tease that there are five important takeaways from this week’s General Hospital for GH viewers to take note of, and of course, as always, suspense, mystery, and plenty of drama!

Her intention was to confront Dante and talk him into coming home. Meanwhile, Lulu will go to her father in law Sonny Corinthos (Maurice Benard) for help in bringing Dante home. She doesn’t know Maxie and Peter went to do the same thing. Dante didn’t want to see Maxie and didn’t care that Lulu and the kids were pining for him back at home. Maxie was not satisfied with his answer and barged into what seemed to be the visitation room after WSB Agent Evans (Jason Ryan Lovett).

A gunshot rang out after Maxie cried out, “Dante! NO!” Previews show Maxie looking down as if at someone on a stretcher and says “he’s being taken to General Hospital.” This seems to imply Dante was shot. Will he come back alive or possibly dead or in a coma? Lulu will be furious when she finds out what Maxie did and Sonny probably will too, as well as Dante’s mother, Olivia Falconeri Quartermaine (Lisa LoCicero).

2. Shiloh Archer Behind Bars – But Is Wiley Out Of Danger?

The truth about Wiley Cooper-Jones (Eric and Theodore Olson) really being Michael Corinthos (Chad Duell) and Nelle Benson’s (Chloe Lanier) presumed dead son Jonah Corinthos is getting closer to coming out. But there are still some Shiloh (Coby Ryan McLaughlin) situations to be settled before that happens.

Shiloh was arrested just as he picked up some DNA test results he ordered at General Hospital to prove he is Wiley’s birth father. As General Hospital viewers know, they could show he’s not. Or, he could have had them doctored to show that he is since he has followers everywhere at his beck and call.

He dropped the results on the floor unopened. And Michael himself talked Lucas Jones (Ryan Carnes) into tearing them up and throwing them away. Lucas will want answers this week, however, Shiloh will grow desperate and Detective Harrison Chase (Josh Swickard) has bad news. Will this be related to both Shiloh and the DNA results?

3. Valentin Cassadine, Jasper Jacks And Nina Reeves Spy On Each Other

This week Nina will cross-hire Curtis to tell her everything he digs up about Jax for Valentin, but before he tells Valentin. Nina stlll doesn’t quite trust her fiancé, apparently. Meanwhile, Jax has another spy in the office, and they are in cahoots to take down Valentin – Hayden Barnes (Rebecca Budig)!

4. The Aftermath Of Oscar Nero’s Death

Julian Jerome (William DeVry) and Kim Nero (Tamara Braun) will have a heart-to-heart talk about all that has happened and Kim will continue to work on her grief. She is now seeing Dr. Massey  and Julian will continue to support Kim emotionally, as will Oscar’s birth father, Drew Cain (Billy Miller). Drew and his twin Jason will honor their promise to Oscar and start building the tree-house for the younger set on the Quartermaine mansion grounds.

Julian’s sister, Ava Jerome (Maura West) also continues to try to work through her grief over her daughter Kiki Jerome (Hayley Erin). Kiki was murdered by her then lover, Ryan Chamberlain (Jon Lindstrom) several months ago.

Julian will also try to support her in her grieving process, and possibly question her methods when he hears she is paying psychic Sibley Gamble (Veronica Cartwright) to “channel” Kiki’s spirit in an effort to bring closure. Kristina Corinthos-Davis (Lexi Ainsworth) will also caution Ava about something this week and Ava will again do or say something to make Sonny furious with her!