Bold And The Beautiful Spoilers Wednesday, July 17: Bridge Fight Over Thomas – Liam Looks Back On His Romance With Hope 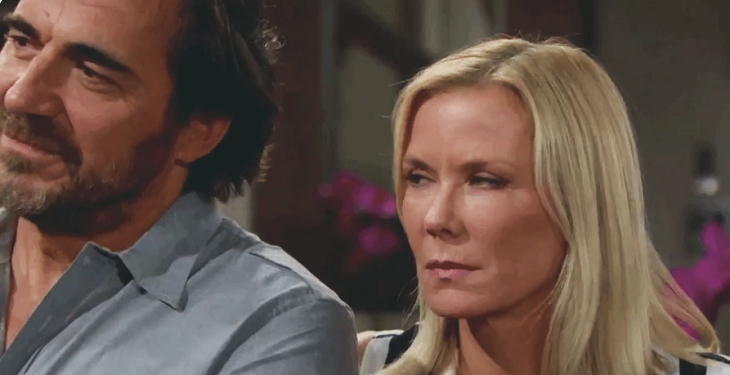 The Bold and the Beautiful spoilers for Wednesday, July 17, tease that things will really heat up between Brooke Forrester (Katherine Kelly Lang) and Ridge Forrester (Thorsten Kaye). As B&B viewers know, Brooke has just angrily told Ridge that she believes Thomas Forrester (Matthew Atkinson) is manipulating Hope Logan (Annika Noelle) into marrying him. And of course, that’s not going to sit well with Ridge.

Wednesday’s episode of B&B promises a major argument between Brooke and Ridge, as they try to reach a mutual understanding about Thomas and Hope’s upcoming wedding. As far as Ridge is concerned, this wedding should be a happy occasion for everyone – after all, it signifies that Hope is finally moving on with her life after the death of Beth Spencer. Ridge is glad to see Hope moving on, and he thinks that she and Thomas could be happy together.

But it looks like Brooke’s not going to stand for Ridge’s fairytale version of Thomas and Hope’s “romance.” The way Brooke sees it, there’s no romance there at all – there’s just an obsessed man trying to ensure a quick wedding before the bride-to-be changes her mind. Plus, there’s the manipulation angle. Brooke thinks that Thomas is fixated on Hope, and as B&B viewers know, she’s absolutely right.

Bold And The Beautiful Spoilers – A Heated Confrontation Is Coming Up

At any rate, viewers can expect a big confrontation as Ridge calls out Brooke for hating the idea of Thomas marrying Hope. He might point out that when Liam Spencer (Scott Clifton) and Steffy Forrester (Jacqueline MacInnes Wood) split up and Liam married Hope, Brooke expected him to just roll with it and be happy about the situation. Ridge might demand that Brooke do the same now that the tables have been turned.

But there’s no way that Brooke is going to stand for that kind of talk. She desperately wants Hope to snap out of it and realize that she should be with Liam, and she’s not going to back down from her anti-Thomas stance. Look for a major “Bridge” blowup on Wednesday’s episode, as the two parents unsuccessfully try to persuade each other.

Meanwhile, on the new episode of B&B on Wednesday, July 17, Liam will have a tough time. He’s just learned from Hope that she’s planning on marrying Thomas the very next day, and he’s horrified. He just wants to do something to stop what he knows is a big mistake fo Hope, but he doesn’t know how.

Bold And The Beautiful Spoilers – Will Need Support From Steffy Forrester

He’ll probably get some support from Steffy along the way. Steffy has agreed to be Hope’s maid of honor, and she generally supports Hope’s decision to marry her brother, but she’s also acutely aware of how devastated Liam is about the whole situation. After all, it was just a couple weeks ago that Liam and Hope

B&B viewers can expect to see Liam reflect on his own relationship with Hope. We should be treated to some nice scenes as Liam looks back on his romantic memories with his ex-wife. He’ll wish that there was a way he could reclaim their relationship, and he’ll likely try desperately to think of a way to get Hope to come around so they can be happy again.

Bold And The Beautiful Spoilers: Flo Gets Drunk And Threatens To Reveal Secret Before Hope's Wedding – Zoe Panics https://t.co/KnRoGaXbCs

But unfortunately, it looks like Hope and Thomas will indeed tie the knot. But that’s not to say that their wedding will go off without a hitch. Rather, it looks like there will be some interesting twists and turns along the way, along with a few moments where it looks like Hope may not actually walk down the aisle. But in the end, it seems they’ll indeed become husband and wife, much to Liam’s chagrin.