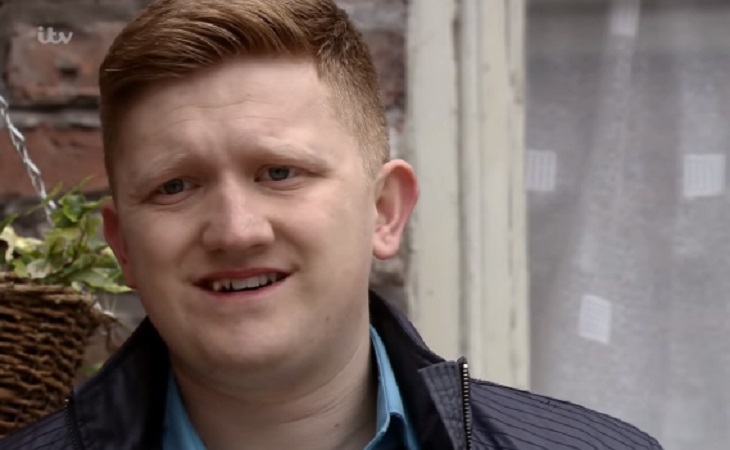 Coronation Street spoilers for Wednesday, July 17thfinds Bernie Winter (Jane Hazelwood) accusing Chesney Brown (Sam Aston) of trying to sleep with her even though she’s the one who has been putting the moves on him. This comes after Chesney tries to tell Gemma Winter (Dolly Rose Campbell) the truth about his feelings, while also hoping that they can repair their relationship.

Despite all the warning signs that said Bernie would be nothing but trouble, Gemma was pleased to find out that Chesney had offered her mother Bernie a place to stay when she had nowhere to go. Yet, the moment that Chesney prepares the sofa bed for Gemma’s mother, he is left horrified when Bernie suggests that he share the bed with her. Later on Chesney tries to tell Gemma that it was Bernie who was coming on to him, but the future mother doesn’t seem to be convinced by what he has to say.

Meanwhile, it appears as though Gary Windass (Mikey North) will get caught red handed after he tries to frame Rick Neelan for the death that happened after the roof collapsed at Underworld. Realizing that he needs to divert everyone’s attention somewhere else, he comes up with a plane to target someone who is no longer around to defend themselves. And that one person happens to be his murder victim, Rick.

Coronation Street spoilers tease that Gary will not only break into Rick’s home, but he will also help himself to one of his jackets and smear it with anti-vandal paint. Gary hopes that the police will think that it was Rick who caused the roof to collapse, which resulted in the tragic death of Rana Habeeb. Unfortunately for Gary, he is going to get caught red handed when Sharon Bentley (Tracie Bennett) catches him in the act and demands answers right away.

Elsewhere, there is going to be a brutal turn in the storyline between Yasmeen Nazir (Shelley King) and her control freak partner, Geoff Metcalfe (Ian Bartholomew). Up until now, he’s managed to play some pretty nasty mind games, but it’s about to get worse. Actress Shellley King herself said that some of the upcoming scenes between her and Geoff are going to be quite brutal to watch, but it will also be done with a “duty of care” to the viewing public.

She told Express.co.uk, “We have to trust each other because this story is going to get darker and darker and truthfully darker based on storylines the writers have heard and we have heard. What you will see will become brutal, not physically brutal but emotionally brutal – which is worse in a way. And it’s a long term [storyline] and that’s the good thing about it. It’ll go on for about a year in little bits.”