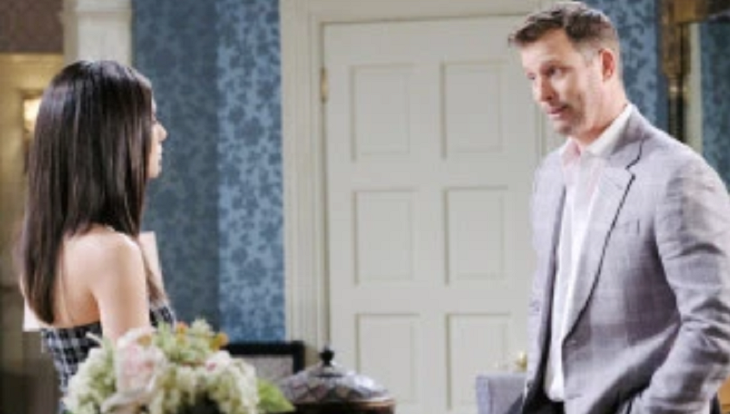 The troubles is that Stefan’s is now a person of interest in the kidnappings of Ted Laurent (Gilles Marini) and Kate Roberts DiMera (Lauren Koslow). Kristen forced them to blame their kidnappings on Stefan as part of her plan to take DiMera Enterprises away from him.

Days of Our Lives viewers will recall on Friday’s episode, when Hope Brady (Kristian Alfonso) was questioning Ted and Kate after rescuing them from being locked in the secret room for several days, Kate kept trying to hint that it might have been a DiMera other than Stefan. But Ted finally pinned it on Stefan as Kristen had instructed. Having two corroborating witnesses pinning their kidnappings on Stefan is not something he can easily dismiss or get out of!

Days Of Our Lives Spoilers – Why Would Nicole Walker Want To Work There?

Stefan has security cameras outside the DiMera Mansion, but as far as Days of Our Lives viewers know, none inside or this whole case that started with the kidnapping of Holly Jonas (Scarlett and Harlow Mallory) could have been solved a long time ago.

The mystery of who knocked out Ted with a fire poker and who helped Kristen get him and later Kate, who she knocked out with a large hair dryer in her room at the Salem Inn into the secret room would have also been solved. Days of Our Lives viewers also know Xander Cook (Paul Telfer) is rapidly becoming less and less enchanted with Kristen or willing to help her do anything!

Days of Our Lives viewers will also recall that shortly before Kate went missing, she and Gabi had been talking about Nicole and her strange behavior. Especially troubling was why Nicole would want to work in the DiMera mansion heading up “Basic Black.”

Considering her presumed dead daughter Holly had been kidnapped from there; that did not seem at all normal behavior for a grieving mother. Although it is true that people grieve differently and some do just find it easier to keep busy and distracted from their grieving process as they work through it.

According to the Soap Opera Digest article, Gabi will bring her suspicions to Brady Black (Eric Martsolf) and lay it out to him that she thinks it was Nicole, not Stefan, who kidnapped Ted and Kate.

Brady won’t know what to think or believe about Gabi’s allegations at first, because even though he agrees that Nicole has been exhibiting strange behavior, he cannot fathom that she could or would commit a crime like that on her own. However, in the back of his mind he knows there is something definitely off about Nicole, and can’t completely dismiss Gabi’s claims.