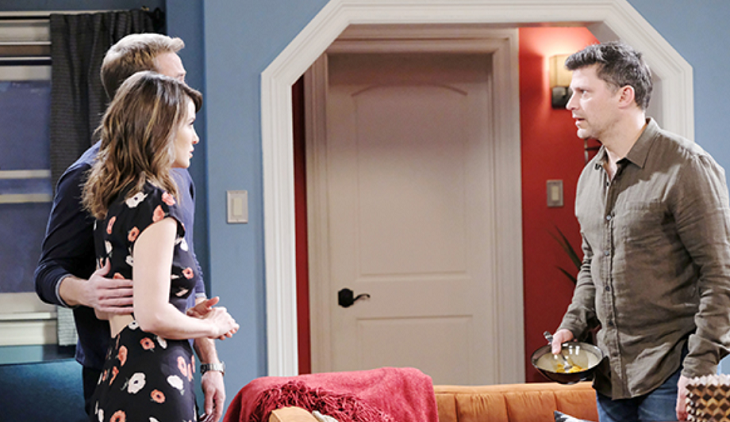 Days of Our Lives (DOOL) recap for Tuesday, July 16, 2019, reveals Eve Deveraux (Kassie DePaiva) shows up at the police station where Eli Grant (Lamon Archey) and Lani Price (Sal Stowers) are and pulls Xander Cook (Paul Telfer) into her office to question him.

Eve berates Xander for helping the Dimeras. Xander expects Eve to get him out of this if she knows what is good for her. Eve tells Xander that Jack Deveraux (Matthew Ashford) already has the diary. Xander threatens to tell Jack how long Eve kept it from him.

Eve claims she can’t make these charges disappear. Eve promises to try to get a bail hearing. Xander tells Eve he will roll on his partner when she gets him immunity. Brady Black (Eric Martsolf) confronts Eve about turning Xander loose. Eve thinks Brady should comfort Nicole Walker (Arianne Zucker).

Days of Our Lives Stefan Dimera (Brandon Barash) realizes that Gabi Hernandez (Camila Banus) thinks Nicole Walker (Arianne Zucker) is behind the kidnapping. Stefan doesn’t understand why Nicole would do this when he gave her a job. Gabi tells Stefan that Nicole has been planning this the whole time. Stefan is determined not to let Ted and Kate, or Nicole get away with this. Gabi promises to get Stefan out of there. Stefan thanks Gabi for standing up for him. Gabi knows Stefan would not have sent Nicole downstairs if he put Kate and Ted in the room.

Days of Our Lives Hope Brady (Kristian Alfonso) asks Ted Laurant (Gilles Marini) what he wanted to tell her about Nicole. Ted tells Hope that Xander lied about Holly Jonas (Harlow and Scarlett Mallory) being alive and used their meeting to kidnap him. Ted assures Hope there is nothing he wouldn’t do for her. Ted knows Hope can’t be with him until she fully trusts him. Ted says Hope needs to move on; he says maybe it is. Lani and Eli come to the hospital to speak to Kate and Ted.

Days of Our Lives Kate Dimera (Lauren Koslow) is talking to Rex Brady (Kyle Lowder) about throwing Brady out of Titan. Rex goes to check on Kate’s lab results after telling her Brady was worried about her. Brady comes to visit Kate, and she agrees to help him take down Xander.

However, Kate wants Brady to help take down Stefan as well. Brady says at least Kristen is dead, Kate tries to warn him otherwise. Kate goes to Ted’s room to speak to him and find him and Hope kissing. Kate says they won’t be safe until Kristen is gone.

Days of Our Lives Brady tells Nicole he cannot have a relationship with her because of Eric Brady (Greg Vaughan). Brady wants Nicole to work with him. Nicole can’t promise to keep things professional. Nicole starts to kiss Brady, he pulls away and tells her he is not doing this and leaves. Nicole is furious because Eric got in the way again. Nicole starts to leave but finds Lani and Eli outside her door with questions about Xander.

Nicole invites Lani and Eli in, and they ask why she didn’t report Ted’s supposed murder. Nicole claims that she didn’t take Xander seriously. Nicole accuses Xander of threatening her as well. Lani and Eli say Ted and Kate are lucky they didn’t die down there. Nicole asks if Xander has admitted to working for Stefan. Eli tells Nicole about the deal Xander asked for, she dismisses them and plans to figure out what Xander is planning. Xander shows up outside Nicole’s door. Xander takes Kristen’s Nicole mask to leave her twisting in the wind as she did him.

Days of Our Lives Eric storms into his apartment, Sarah Horton Brady (Linsey Godfrey) asks him what’s wrong, he says Nicole is gone. Eric tells Sarah that Nicole can’t stand the sight of him, let alone get near her. Eric admits that this Nicole isn’t the woman he fell in love with, he doesn’t know her. Eric wants to leave town.

Sarah tells him he can’t go so many people will miss him, including her. Eric says, leaving is for the best. Sarah doesn’t know what she would do without Eric; he is important to her. Rex interrupts, and Sarah and Eric start to kiss. Rex asks if everything is OK. Sarah tells Rex that Eric had another run-in with Nicole. Rex tells Eric that Hope saved Ted and Kate and that Xander kidnapped them. Sarah tells Rex that Eric wants to leave town. Rex and Sarah insist that Eric stay, he agrees.