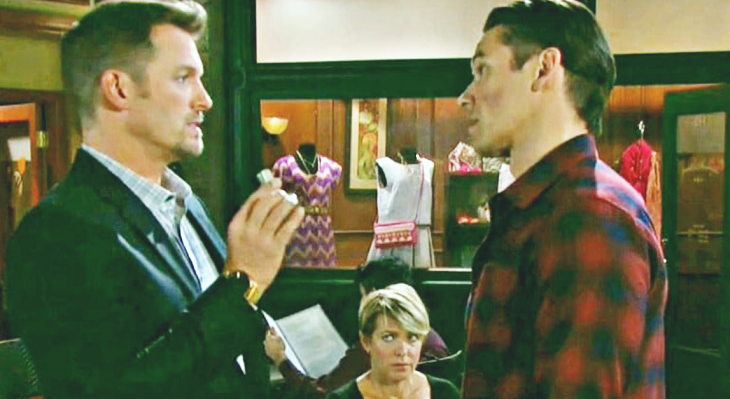 Days of Our Lives spoilers tease another exciting day of drama for Days of Our Lives viewers for Wednesday, July 17 as various Salemites interact with each other in tense confrontations and interesting interactions!

Gabi Hernandez (Camila Banus) has a bizarre encounter with “Nicole Walker” (Arianne Zucker). As Days of Our Lives viewers know, nearly any encounter with fake Nicole can be bizarre, considering she’s really Kristen DiMera (Stacy Haiduk) in disguise. However, Xander Cook (Paul Telfer) stole her Nicole mask in Tuesday’s Days of Our Lives episode. Perhaps Gabi spots her with the wig but her face is covered with something else? Days of Our Lives Soap Opera Digest says “Nicole” will have the Mexican wrestling mask on her face that Xander sent in place of her Nicole mask.

Brady Black (Eric Martsolf) tries to oust Xander from Titan Industries, after having hired him only a few months ago, giving him an executive position in exchange for him handing over a recording implicating Nicole in a crime and giving her a divorce, when fake Nicole first came back to Salem.

Brady is probably tired of Xander’s antics and maybe Brady thinks that he’s been doing more monkey business than real business. Xander’s arrest on Monday’s episode and Brady’s finding out about Kate DiMera’s (Lauren Koslow) attempted murder by Xander didn’t help. Xander did manage to wiggle out of the cuffs again, if only temporarily, by Eve Deveraux (Kassie DePaiva) granting bail.

Gabi pressures Kate Roberts DiMera (Lauren Koslow) to come clean as Kate knows a lot that she’s not telling, especially about fake Nicole! Gabi and Kate had talked about Nicole’s strange behavior before Kate disappeared. Gabi now knows that her boyfriend and employer Stefan DiMera (Brandon Barash) has been arrested in Kate’s kidnapping and disappearance as well as Ted Laurent’s (Gilles Marini). She already suspects fake Nicole is behind the kidnappings and disappearances.

Gabi also knows that the two were held in captivity in the secret room in the DiMera mansion leading to the tunnels outside for several days. Kate will probably tell her more about that experience and how they got there, since Kate already knows Ted’s story and how he got there, and he was trapped longer than she was.

Jennifer Horton (Melissa Reeves) will make an impassioned speech to Jack Deveraux (Matthew Ashford) about the person he used to be, last having heard that didn’t want to get his memory back. The Days of Our Lives weekly preview showed Jack and Jennifer in two scenes, both of them having conversations over a meal.

In the first one he asks her if she’s always been such a pest, and she nods “yes.” In the second scene, he tells her that he’s been thinking a lot and now he wants to remember his past! Jack seems to be getting more and more disenchanted with his current wife, Eve Deveraux (Kassie DePaiva) and even though he may not consciously remember the man he used to be, some of it appears to be coming to the surface.