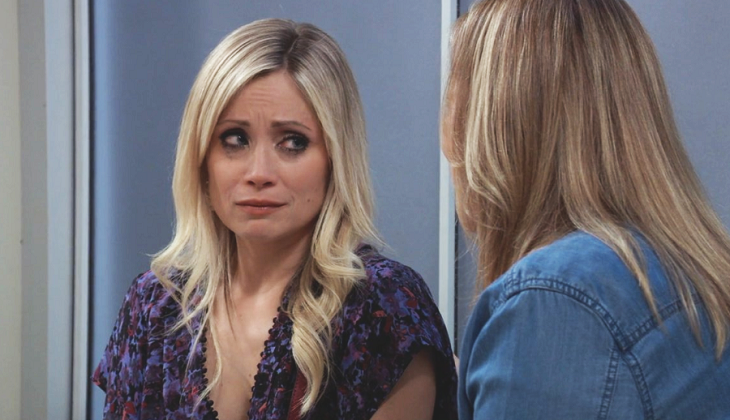 Maxie West (Kirsten Storms) tells Lulu about her and Peter’s visit to Dante. Lulu is furious at Maxie for interfering. Lulu runs into Laura Webber (Genie Frances) at the hospital and tells her what happened with Dante and Peter. Lulu yells that Maxie is to blame her for Dante’s relapse.

Lulu says Maxie ruined all the progress that Dante had made. Laura talks to Lulu and tells her she doesn’t really believe that and Lulu agrees. Laura had no idea that Dante’s PTSD was this bad. Maxie returns and Lulu and she talk. Lulu tells Maxie that she got the answers Lulu needed even if it wasn’t what she wanted to hear.

General Hospital’s Lulu visits Peter and tells him she knows this was Maxie’s idea. Maxie returns and tells Peter this is her fault. Peter tells Maxie she was trying to help, and that is why he loves her so much. Maxie tells Peter she wishes Lulu felt the same. Maxie doesn’t think Lulu will forgive her for interfering.

General Hospital’s Curtis Ashford (Donnell Turner) is in Drew Cain’s (Billy Miller) office asking who drugged him. Drew explained that the person who drugged him knows they were wrong. Hayden Barnes (Rebecca Budig) walks in and interrupts. Hayden says long time no see, Drew demands to know what she wants. Hayden explains that she is Jax’s CFO.

Drew doesn’t understand how Jax could hire someone like Hayden. He demands to know what Hayden wants now. Drew tells Hayden he is building this company for Scout, Jax interrupts. Meanwhile, Nina wants Curtis to give her information before he turns it over to Valentin. Drew wants to know why Jax would hire Hayden, knowing she was fired from her last job for embezzlement. Drew wants Jax to watch his back and his wallet and not to let Hayden bankrupt them.

General Hospital’s Jasper Jacks (Ingo Rademacher) is in Nina Reeves (Cynthia Watros) office asking how Valentin Cassadine (James Patrick Stuart) showed up and claimed everything. Nina tells Jax he already knows everything about her fiance’. Curtis interrupts and tells Jax about Hayden and Drew. Curtis thinks Jax needs to do some damage control.

General Hospital’s Ava Jerome (Maura West) meets with Sibley Gamble (Veronica Cartwright) for her to try to channel Kiki Jerome (Hayley Erin). Kiki speaks to Ava through Sibley. Kiki talks about the necklace and how she used to wear it all the time. Kiki says she took that necklace off the night Ava drugged Sasha Gilmore (Sofia Mattsson) and set up Griffin Monroe (Matt Cohen). Kiki says she tried to slap Ava. Ava tries to apologize to Kiki. She tells Ava she never wants to talk to her again.

Kiki says she is at peace away from Ava. Ava tells Kiki that Ryan Chamberlain (Jon Lindstrom) said she forgave her. Kiki questions Ava believing Ryan. Ava wants to move past the pain. She is fine with this and leaves. Kiki returns and says she loves and misses her sister. Sibley tries to comfort Ava, saying Kiki might want to talk later. Ava asks Sibley about Nikolas Cassadine (Tyler Christopher).

General Hospital’s Robert Scorpio (Tristan Rogers) meets with Julian Jerome (William DeVry). Robert says Julian is a killer that could return at any time. Julian looks at Kim Nero (Tamara Braun) and says no anymore. Julian tells Robert he has someone in his life now and walks over to Kim.

Kim tells Julian she’s sorry and talks to him about her session with the doctor. She says she told the doctor about what happened with Drew. Kim and Julian admit that something has changed in their relationship. Kim thinks that Julian wants to break up with her, but he says his feelings haven’t changed.

General Hospital’s Hamilton Finn (Michael Easton) joins Robert at Charlie’s and gives him an update on Peter. Finn tells Robert that Peter doesn’t want Anna Devane (Finola Hughes) to know that he was shot. Robert questions Finn listening to Peter. Finn tells Robert his hands are tied, Robert says yours may be but mine aren’t. He says this is the perfect opportunity to bring Anna home. Finn wishes Anna was home right now. Robert brings up Hayden’s return.