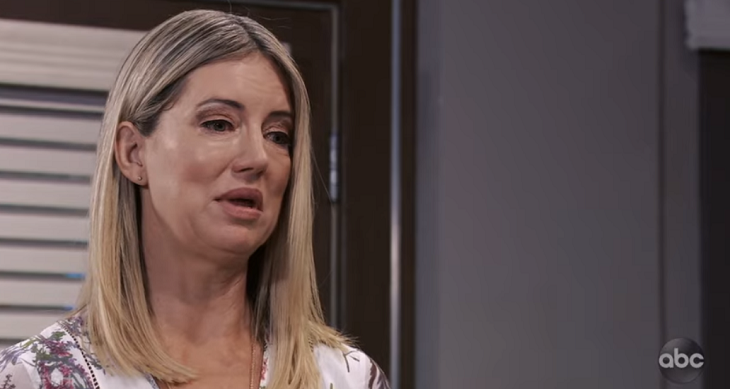 General Hospital spoilers for Wednesday, July 17 promise another exciting day of drama as some mysteries begin, and others seem close to being solved!

At the Baldwin house, Cameron Webber (William Lipton) surprises – or shall we say – shocks his mother, Elizabeth Webber Baldwin(Rebecca Herbst) and stepfather, Franco Baldwin (Roger Howarth) as he excitedly tells them he has a car. Both Franco and Elizabeth look extremely serious and concerned. Of course, they were not at Oscar Nero Quartermaine’s (Garren Lake Stitt) will reading so they wouldn’t know that Oscar left Cameron his car.

At Diane Miller’s (Carolyn Hennesy), Dr. Lucas Jones (Ryan Carnes) and his husband Brad Cooper (Parry Shen) get some good news from their attorney Diane. Lucas, with an inquisitive look on his face, asks: “So this is good news?” while Brad looks a little bit more nervous. Diane, happy, tells them it’s the best news!

Lucas already knows about Shiloh Archer (Coby Ryan McLaughlin) being arrested, since it happened right in front of him, so Diane must be updating Lucas and Brad about something else. But will the good news stay good, or is Brad concerned the house of cards concerning the adoption of their son Wiley Cooper-Jones (Eric and Theodore Olson) fall apart anyway? No one of the three present in Diane’s office knows that he’s really Jonah Corinthos yet.

Elsewhere, Willow Tait (Katelyn MacMullen), who has just been released from jail while Shiloh went into jail, catches a friend up about her situation. She tells another young lady that she was terrified it was for nothing – presumably about her time in jail for contempt of court.

But who is that she’s talking to – from the back, her hair looks like that of – Hayden Barnes (Rebecca Budig)? Do they know each other from Beecher’s Corners? General Hospital viewers should recall when Hayden first came to Port Charles several years ago, she had come there from Beecher’s Corners!

Over at General Hospital, Nina Reeves (Cynthia Watros) visits her aunt Liesl Obrecht (Kathleen Gati) in her hospital room, where Liesl is recovering from a tumble – or push – overboard into the water from the deck of the Haunted Star. Nina looks a little annoyed with her aunt, or possibly suspicious of something Liesl has said, when Liesl becomes outraged and tells Nina, “Watch it, niece! I will blow your house down!” It sounds like Nina told or asked Liesl something she didn’t like at all!

In the kitchen of the Corinthos home, Carly Corinthos (Laura Wright) interrupts what appears to be a rather tense conversation between her daughter Josslyn Jacks (Eden McCoy) and Dev Cerci (Ashton Arbab), their young guest. Carly asks if there’s a problem as Joss looks calm but Dev looks a tad guilty…but then, perhaps he’s just got one of those guilty looking faces.

Elsewhere, Ava Jerome (Maura West) has once again raised the ire of Sonny Corinthos (Maurice Benard), as he gives her a stern warning, and tells her “You try that again, and see what happens!” Ava – what have you done this time?!