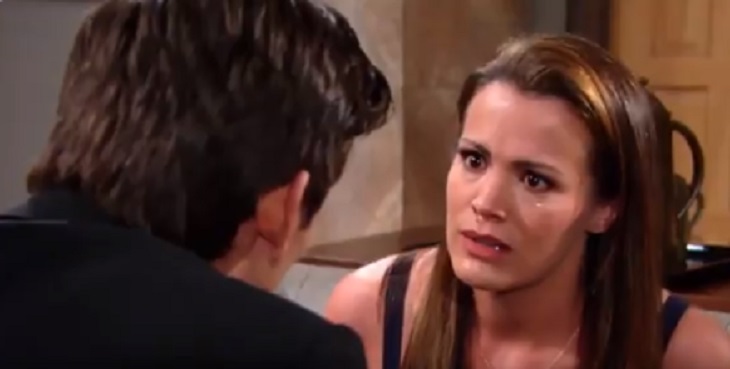 The Young and the Restless spoilers indicate that Adam Newman (Mark Grossman) will agree to drop his custody case in exchange for something else.

Adam and his brother Nick Newman (Joshua Morrow) are engaged in a heated battle over custody of Christian Newman (Jamie and Alister Tobias). Adam is the boy’s biological father, but he kept it a secret and let Nick raise the boy.

Now, Adam is threatening to take the boy away from Nick, which has the rest of the Newman family taking sides in the battle. Everyone is supporting Nick because he’s a good father and they think it’s unfair that Adam wants to take Christian away.

Young And The Restless Spoilers – Chelsea Is Single Again

One person who is on Nick’s side is Adam’s ex-wife Chelsea Lawson (Melissa Claire Egan). When Adam returned, he wanted to find Chelsea and reunite with her and their son Connor Newman (Gunner and Ryder Gadbois).

But their reunion plans were dampened when Chelsea revealed she had married Calvin Boudreau (John Burke).

With Calvin’s untimely demise, it looked like Adam had a shot at winning Chelsea back. But she’s told Adam that she doesn’t want anything to do with him, and she’s also becoming closer to Nick.

All Adam wants is his family back, but he feels that has been taken away from him. If he can’t have Chelsea and Connor, he’s going to do the next logical thing and get custody of his son Christian.

Nick knows he’s got a tough fight on his hands and he’s scared at the thought of losing his son. Chelsea doesn’t want to see Nick hurt and she’s pleading with Adam to reconsider his custody lawsuit. Adam knows he has the upper hand and he’s going to use this to his advantage. He’ll agree to drop the lawsuit if Chelsea will come back to him.

Young And The Restless Spoilers – Will Chelsea Take One For The Team?

Chelsea has made it clear that she doesn’t want to be with Adam, however she also knows that it’ll kill Nick if he loses Christian. Even though Chelsea’s heart is with Nick, she’ll do whatever it takes to make sure that he and Christian stay together.

Do you think Chelsea will go back to Adam to protect Nick?