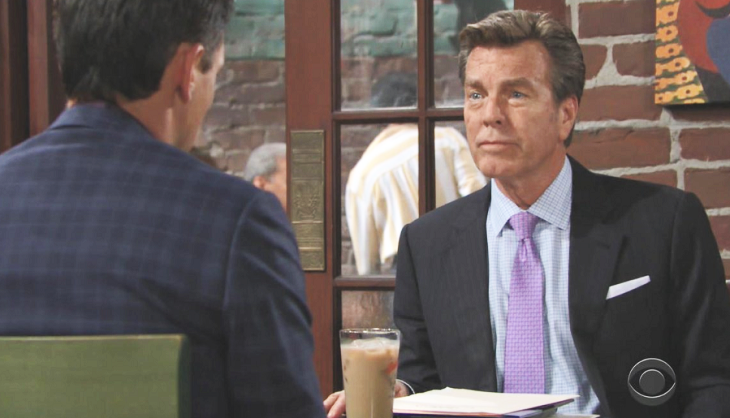 “The Young and the Restless” (YR) recap for Tuesday, July 16, 2019 reveals that over at the Chancellor mansion, Billy Abbott (Jason Thompson) awakens on the sofa after a nightmare about Delia Abbott (Sophie Pollono).

At the park, Rey Rosales (Jordi Vilasuso) updates Nick Newman (Joshua Morrow) that Chance Chancellor may have had a sterling reputation before, but from what he’s learned, he’s gone in a very different directi He was involved in money laundering and other shady deals. Nick’s bewildered, but tells him to keep digging to find out if Adam Newman (Mark Grossman) was involved in any criminal enterprise.

Rey talks to Sharon Newman (Sharon Case) by phone then informs Nick that she seems to see Adam for who he is now. Nick feels Chelsea Newman’s (Melissa Egan) eyes are open now as well – they have to make sure the judge’s eyes are too.

Young And The Restless Spoilers – A Newman Family Dinner Is Planned

At Crimson Lights, Y&R’s Nikki Newman (Melody Thomas Scott) and Victor Newman (Eric Braeden) get coffee. She feels it’s a gift to spend this time together and should make the most of it. He senses something’s on her mind. Nikki proposes they hold a family dinner for the adults only. Victor’s not inclined to include Adam Newman at this point. Nikki runs off as Victor says he has something to take care of himself.

In Society, Cane Ashby (Daniel Goddard) updates Jill Abbott (Jess Walton) on his new work. She learns he’ll be in New York with Traci Abbott (Beth Maitland), who will be there to meet the publisher about her new book. He crows that he’s the inspiration for the main character because he and Flynn both go through internal conflict. Jill worries. Traci’s delving into his private life and putting it on display. Cane corrects her; it’s inspirational. Jill will have to get a copy and loves seeing him in a good mood – more power to Traci.

She reveals she’s off to Bali next and Cane tells her she’s an inspiration to him. Jill mentions Lily Ashby (Christel Khalil), and Cane says they haven’t spoken. Jill realizes he’s not doing things to impress her now; it’s progress. Billy arrives. Jill calls him over and mentions Cane and Traci going to New York. Billy asks what the hell game Cane’s playing and rants that he’s a major distraction to his sister. Jill interrupts that the book is about Cane, who stresses they enjoy spending time together, that’s all.

At the Abbott mansion, Y&R’s Jack Abbott (Peter Bergman) notices Traci Abbott’s buoyant mood since she started planning her trip. He credits her for following her inspiration and thinks he should take notes. Traci urges him to be himself and he says he’s at loose ends because he’s between challenges. She talks up his accomplishments and can’t wait to see what he takes on next. Jack agrees, he needs a new mountain to climb. Later, Cane Ashby arrives and asks Traci if she’s having second thoughts about traveling together. She learns of his run-in with Billy Abbott and reassures him. Cane helps Traci with her bags as they head out.

At Nick’s place, Chelsea disconnects from Anita Lawson (Catherine Bach) in frustration after she asks about Calvin Boudreau’s (John Burke) will. Victor appears and needles that she’s made herself quite at home there. Talk turns to Anita. Chelsea explains she and her mother did what was necessary to keep Connor safe. She doesn’t intend to tell him Adam Newman’s alive or bring him to Genoa City. Victor’s understanding, which surprises her, then he says he wants to go see his grandson.

Chelsea makes him promise not to tell him anything about Adam before handing over the camp location. Nick arrives and Victor invites him to the family dinner and includes Chelsea, who’s unsure of her plans. After Victor leaves, Chelsea warns Nick that Adam would blow a fuse if she went to the dinner. Nick wants her to be there and is unconcerned about the statement that makes.

In the park, Y&R’s Jill meets Jack and they discuss Dina Mergeron (Marla Adams). Jill dreams about Katherine Chancellor (Jeanne Cooper), and Jack dreams about the younger version of his mother, who asks him what he wants. Jill thinks he should tell ‘dream Dina’ to back off.

After leaving Colin Atkinson (Tristan Rogers) behind, she counsels he has to make peace with the past before moving forward. Nikki appears and trades snark with Jill, who then leaves. Nikki and Jack talk about his chat with Victor the other day. Jack senses Victor has things going on and hopes to see him back behind his desk. Nikki will do what she can.

These two are off to New York! ✈️ #YR pic.twitter.com/OtOhmxtAdI

Billy spots Jack at Crimson Lights and is puzzled he’s not happier about their healthy numbers. Jack’s in a funk. Billy advises him to travel and arranges for the jet to fly him to Paris to ‘check on the competition’. “Go see Ashley.” And that’s a wrap.