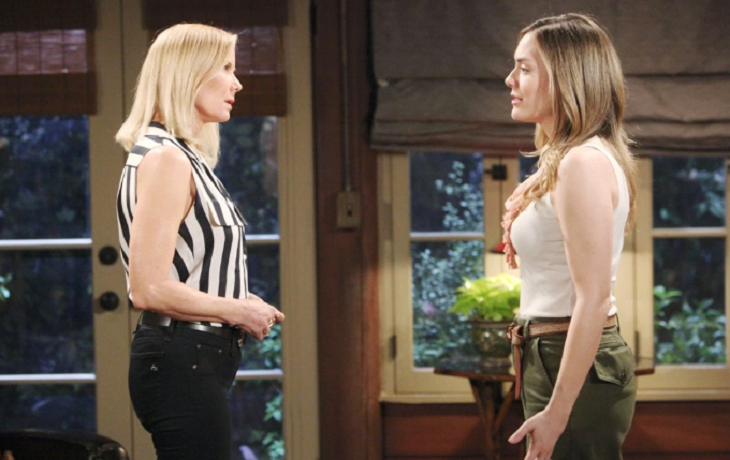 He wonders if Brooke’s upset he offered to have it there – does she hate it that much? Brooke replies: “It’s fine.” She offers to call her family members. Ridge doesn’t want her coordinating a wedding she doesn’t believe in. They rehash her issues with Hope Logan (Annika Noelle) and Thomas Forrester (Matthew Atkinson). Ridge accuses her of thinking there is something wrong with his son.

At the cabin, B&B’s Hope Logan tells Thomas and Douglas Forrester (Henry Joseph Samiri) that Steffy Forrester (Jacqueline Wood) is her maid of honor. After Douglas goes, Thomas tells Hope she made a good choice. She talks about being a blended family and he looks forward to her being Mrs. Thomas Forrester. He kisses her and leaves.

Bold And The Beautiful Spoilers – Thomas Forrester Makes A Confession

Later, Brooke arrives and complains Hope is pledging the rest of her life to a man she doesn’t love and who Brooke doesn’t trust – it’s not too late to call it off. Hope concedes she has doubts, but she’s certain about her feelings toward Douglas. Brooke protests – they’re feelings for a lonely little boy. She warns Thomas will have expectations Hope won’t be able to fulfill – when Hope says her vows tomorrow, she’ll be lying.

B&B’s Thomas joins Ridge  in the main house and informs him it was Hope’s idea to push up the wedding. Ridge asks, “Because of Douglas, right?” Thomas admits he’s more in love than she is right now, and says they haven’t been intimate yet, but adds tomorrow they’ll be husband and wife.

They discuss whether Liam Spencer (Scott Clifton) should come to the wedding. Thomas isn’t bothered if he does. Ridge thinks it might be a good idea to keep him at a distance. Thomas shrugs; it won’t matter after tomorrow. Thomas rejoins Hope in the cabin and offers to stay, before trying a passionate kiss. Hope pulls back. He wants Hope to tell him she loves him, but she just hugs him. After, Hope looks at the moon and thinks about Liam.

Bold And The Beautiful Spoilers – Steffy Forrester Has A Poignant Reminder

At the cliff house, Liam  is tense when Steffy mentions the wedding. She feels no one would blame him if he stayed home. Liam thinks certain people would be ecstatic if he stayed away but he’s not going to make it that easy.

He recaps that Hope Logan Spencer thinks becoming Douglas’ official stepmom is the way to go since she’ll never get to hold Beth in her arms as Steffy’s holding Phoebe right now. Steffy wonders why he doesn’t credit Thomas with making motherhood possible for Hope in a different way. She reminds him he’s not living there because of her brother – Hope annulled their marriage.

Liam’s just concerned Hope’s connection to Thomas is making her weaker and adds, “They’re not married yet.” Steffy apologizes for giving him grief before heading to bed. Liam looks at the moon and reminisces about Hope. And that’s a wrap.