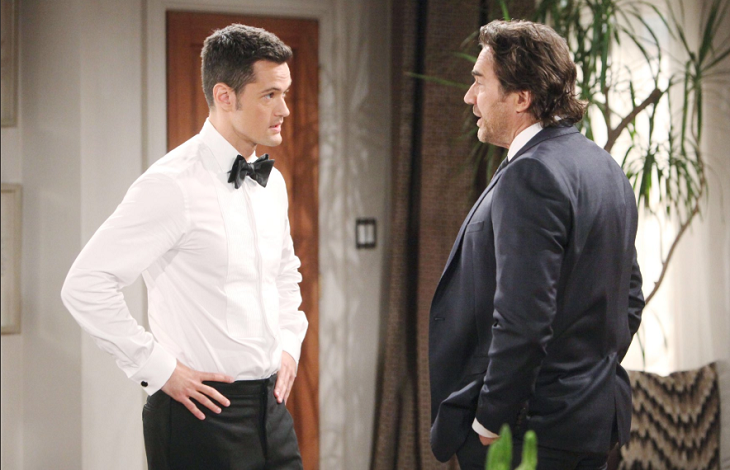 The Bold and the Beautiful spoilers for Thursday, July 18, tease that preparations for the wedding of Hope Logan (Annika Noelle) and Thomas Forrester (Matthew Atkinson) will get underway bright and early. As B&B viewers know, this wedding is coming together very quickly, and everyone will be gearing up for the big ceremony. But as it turns out, there will be quite a few people who are skeptical, or downright negative, about the whole thing.

It looks like Hope will spend some time alone as she prepares herself for the ceremony. As B&B viewers know, she spent some time the night prior reminiscing about her romance with her true love Liam Spencer (Scott Clifton). Hope told her mother Brooke Forrester (Katherine Kelly Lang) that she had serious doubts about marrying Thomas and committing to a life with him, and this will surely be on her mind in the hours leading up to the ceremony.

Perhaps we’ll see the Logan women rally around Hope while she gets ready for her big day. Chances are, Brooke and possibly Katie Logan (Heather Tom) and Donna Logan (Jennifer Gareis) will question whether Hope is ready to commit to another marriage, especially with Thomas. B&B viewers know that Brooke hasn’t been shy about telling Hope to call off the wedding, and she might do so again.

But even though Hope will have her doubts, ongoing B&B spoilers indicate that this wedding is going to barrel forward. After all, Hope won’t want to disappoint Douglas Forrester (Henry Joseph Samiri), as she desperately wants to become a mother to him.

Meanwhile, on Thursday’s new episode of B&B, Thomas will prepare for the wedding as well. Of course, he’s overjoyed at the idea of Hope becoming his wife. It’s everything that he’s fantasized and obsessed about for months now. He and Douglas will likely get ready together and gear up for their big happy day.

But it seems that Thomas will get wind of some serious opposition to his union with Hope. He’ll spend some time with his dad Ridge Forrester (Thorsten Kaye), and it appears that he will start to realize just how strained things are between Brooke and Ridge over this wedding. As B&B viewers know, “Bridge” have been arguing nonstop about this union.

Of course, Thomas has known that Brooke is “team Lope” and would rather that Hope was still married to Liam. But it looks like Ridge might say something to him to indicate that Brooke could be an obstacle to the wedding going off without a hitch, and Thomas will have to act.

Bold And The Beautiful Spoilers – Thope Wedding Will Remain On Track

The Bold and the Beautiful spoilers say that Thomas will find a way to warn Brooke about interfering with the wedding through Ridge. Exactly how that transpires remains to be seen, but perhaps Thomas will issue a subtle warning to Ridge about some devastating consequences if someone tries to stop the wedding.

We’ll see if Ridge actually passes the warning along to Brooke and how that plays out. But at any rate, ongoing B&B spoilers indicate that this wedding ceremony will occur, and vows will be spoken, so it doesn’t look like Brooke will end up doing anything that will bring the wedding to a screeching halt.

B&B spoilers do indicate, however, that there will be some big twists and turns coming as the ceremony approaches. Carter Walton (Lawrence Saint-Victor) will be on hand to officiate, but it looks like there will be some drama along the way, as Liam attends the ceremony and Flo Fulton (Katrina Bowden) has too much to drink and threatens to expose the secret about Hope and Liam’s daughter being alive.

It should all make for an interesting ceremony! Are you looking forward to the drama? In the meantime, keep up with Hollywood Hiccups for all the latest news and updates on all of your favorite daytime television shows right here.