Days Of Our Lives Spoilers: Jack Decides He Wants His Memories Back – How Will He Get His Hands On The Serum? 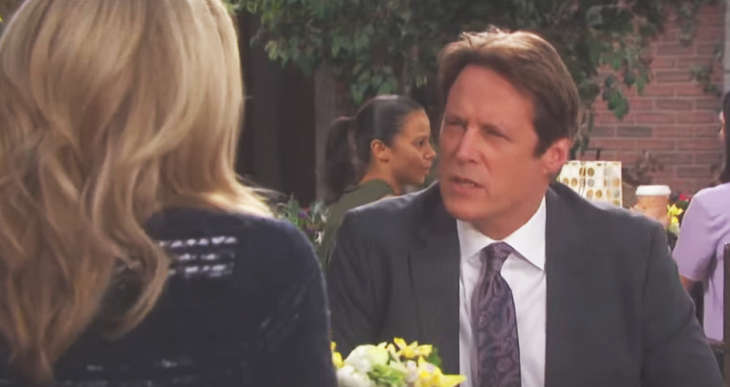 Days of Our Lives spoilers tease that Jack Deveraux (Matthew Ashford) will decide to take the amnesia serum. It will have to be recreated from Dr. Wilhelm Rolf’s (William Utay) formula diary given to him by Will Horton (Chandler Massey) on Wednesday’s episode.

In the Days of Our Lives weekly promo, he is seen with his ex-wife Jennifer Horton (Melissa Reeves) having a bite to eat and asking her some questions about herself and the past. Then he makes a decision that he does want to remember his past and emotionally tells his wife, Eve Deveraux (Kassie DePaiva), saying he’s sorry, but he wants to remember!

Days of Our Lives viewers will recall that Jack made a deal with Will, while he was still in the hospital, for the diary. For giving Jack the formula diary, Will demanded that Jack drop all charges against his son JJ Deveraux (Casey Moss) related to helping his now girlfriend Haley Chen (Thia Megia) try to avoid deportation to China. At that time JJ was in the Salem Jail.

Days of Our Lives viewers will also recall that when Jack first approached his ex-sister in law Dr. Kayla Johnson (Mary Beth Evans) with questions about the amnesia serum, she told him although there had been a batch recreated for the brain tumor that Will had developed, it was not approved by the Food and Drug Administration and she could not give it to him.

She also reminded him that although an antidote was developed for Will, there was no guarantee that Jack, too, would not develop a brain tumor or an even worse if he to take any of the serum. She then steered him to Will, who had the diary at the time. Kayla wasn’t even sure at that time that the antidote would work on Will.

As Days of Our Lives viewers know, Will is now fully recovered from the brain tumor and has been released from hospital and is back home with his partner Sonny Kiriakis (Freddie Smith). Jack will have heard about this and it is sure to be a factor in his decision to try the serum.

Jack has the formula diary and he knows that somewhere at Salem University Hospital there may be enough of the recreated amnesia serum left over from reverse engineering the antidote. And so far it seems to have cured Will. So Jack will want to try at least an initial small dose to see if it works on him.

But how will he get it? Will he or his wife Eve try to steal it, or even try to get Xander Cook Kiriakis (Paul Telfer) steal it for them? Xander’s got enough problems and probably won’t want to risk being seen by Sarah Horton Brady (Linsey Godfrey) trying to locate and steal it.

He wants to be on his best behavior in front of her, even though she is married now. Maybe Xander knows of someone who won’t care about FDA approval to mix up a batch, however. Days of Our Lives viewers will just have to wait and see!